Having wandered through the impressive stupas and temples of Bagan and cruised the Irrawaddy River in full good two days, we were back in Yangon in transit to our night flight to Singapore en route to Manila. Since we are arriving earliest in the morning, we had a full day to ourselves to check out Myanmar’s (formerly Burma) long time capital.

Until 2006, Yangon or Rangoon, which literally translates to “End of Strife” is the capital of the Union of Myanmar. It remains the country’s largest city with over 7 million residents and the center of business, commerce and education.The city is also home to notable and important religious architectures which also serve as its biggest tourist attractions. Given its colonial history, the city is hosts numerous  colonial-era and well-preserved structures and design.

WHAT TO SEE AND DO

Given your limited time, it is worth-wile to check out and spend some of your precious time and perhaps budget in some of the city’s renowned heritage sites and popular must-see attractions. It is best to plan out your day, including transportation preference to ensure that you have enough time to catch your flight.

This iconic stupa is situated right at the heart of Yangon and considered to be one of the city’s important and oldest heritage sites and city landmark. It is believed to have been built some 2000 years ago and pre-dates the bigger Shwedagon Pagoda. More importantly, it is said to contain a strand of Buddha’s hair. Besides its religious value, the stupa has also been at the center of Burmese politics, being the staging area for the country’s popular uprisings in 1988 and recently in 2007.

The pagoda is notable for its octagonal base right up to its middle dome and its golden spire. There are small shops surround the the pagoda’s base. 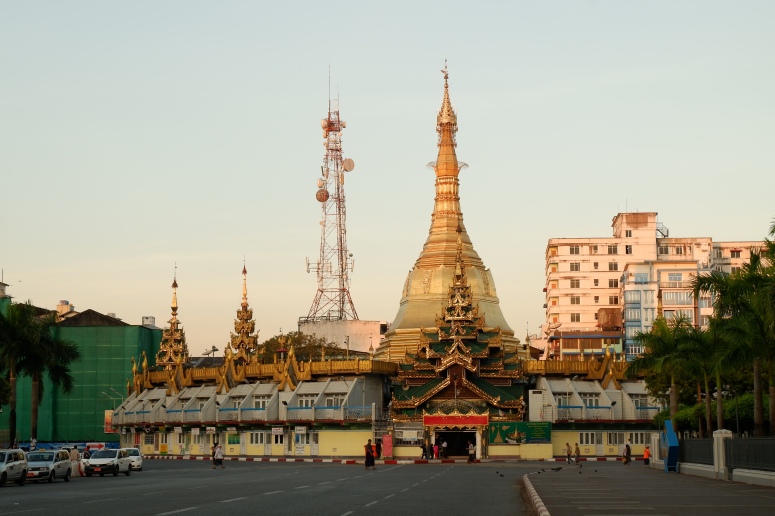 Access: It is located right beside the Yangon City Hall and across the Independence Square. Opening Hours: 4am to 10pm daily Admission Fee: USD 2.00

Officially, the Shwedagon Zedi Daw (The Great Golden Mountain Stupa), the Shwedagon Pagoda is Yangon’s most recognizable landmark and and perhaps the whole of Myanmar. Situated at top of Singuttara Hill, this 326-feet imposing stupa dominates the Yangon skyline and visible from various points upon entering the city center.  It is also considered to be the country’s most sacred Buddhist pagoda given the belief that it enshrined the relics of four previous Buddhas, which attracts thousands of local and foreign pilgrims every year.

The pagoda is also notable for its magnificent architecture having weathered earthquakes, fires and wars. Guarding the pagoda’s entrance is a pair of lion-like creatures called leogryphs. The stupas base is made of gold-covered bricks while its dome or inverted alms bowl are made of gold plates out of donation by people, a tradition said to continue to this day. At the top, the stupa’s crown is covered in diamonds and rubies by the thousands, including a 76 carat diamond.

The pagoda can be accessed through its four entrances. For beginners like us, the local practice is to walk around the stupas clockwise while saying your prayers. It is better to visit here in the early morning or late afternoon since footwear is not allowed inside. 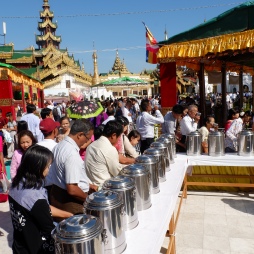 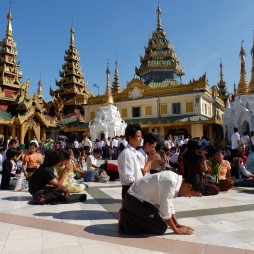 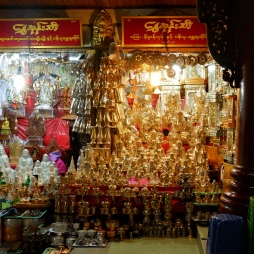 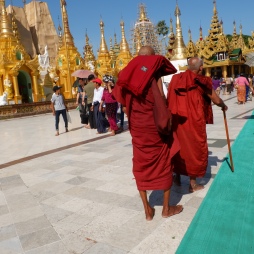 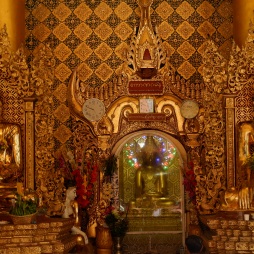 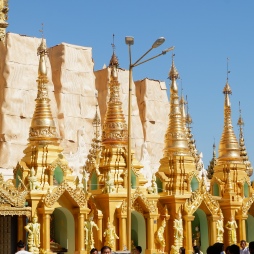 The Kandawgyi Lake or the “Great Royal Lake” is one of Yangon’s major lakes. During the British colonization, the lake was created by extracting water from Inya Lake to serve as the city’s water source. Within its shores is the renowned floating icon which is a replica of a royal barge known as the Karaweik, named after a mythical bird. It has since function as a restaurant. At present, the lake is surrounded by a nature park and a zoological garden. It also offers a beautiful vantage point of the Shwedagon Pagoda. 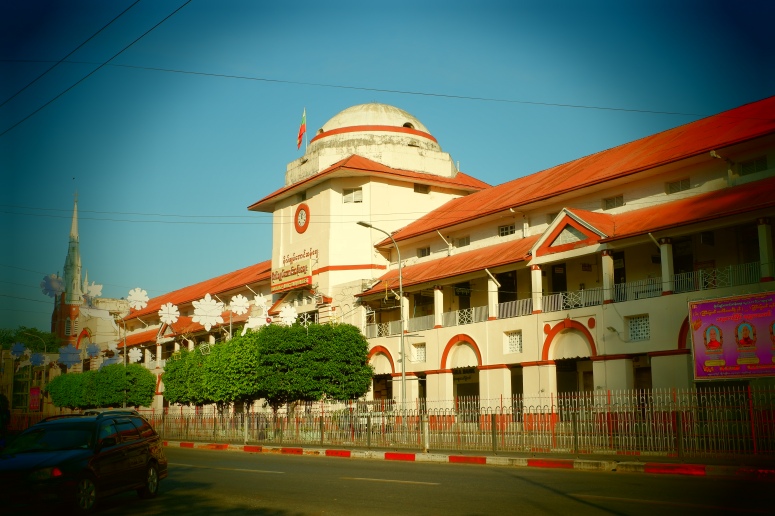 If Saigon has Ben Thanh and Bangkok has Pratunam, then Yangon won’t let you leave without something to bring home. After visiting the city’s attractions, don’t miss checking out Myanmar’s major bazaar and market housed within colonial-era buildings in central Yangon. Built in the 1920’s, it was previously known as the Scott Market. Prominent displays for sale are Burmese handicrafts, antiques, artworks, clothes, medicines, food items and jewelries, including the famous jade, ruby and other precious stones. 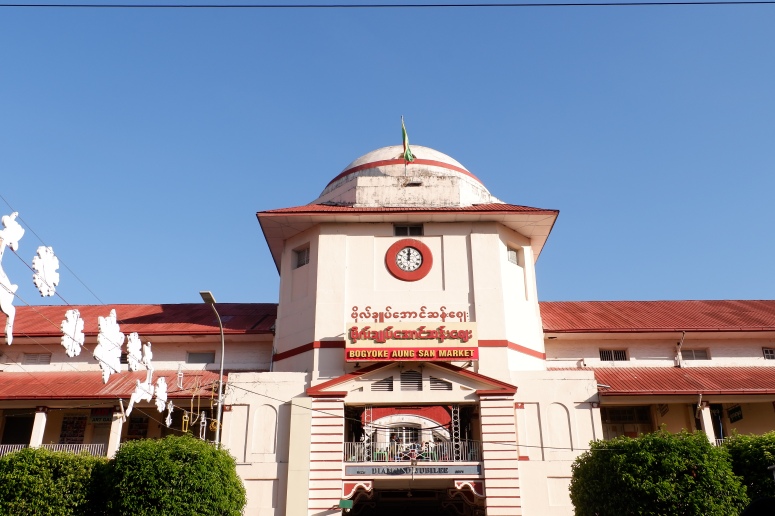 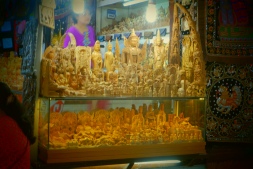 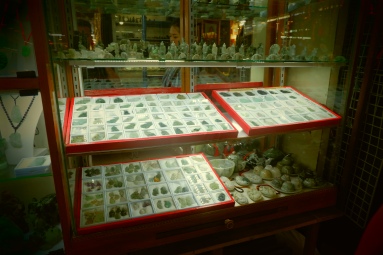 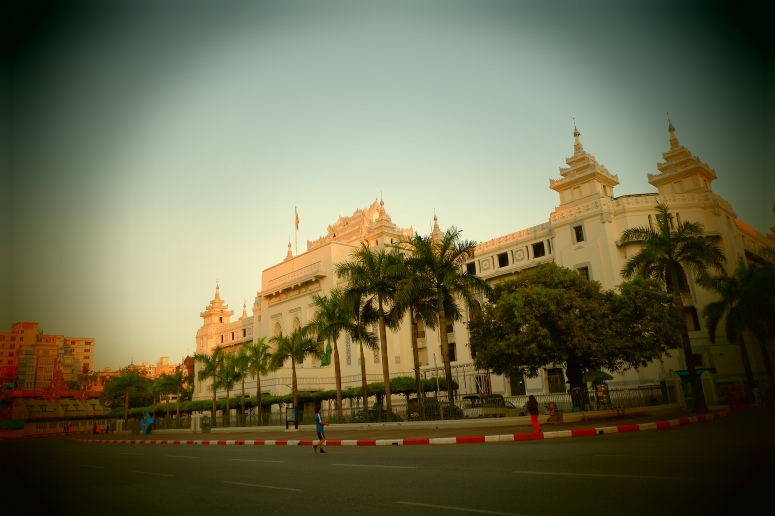 Located right at the center of Yangon next to the Sule Pagoda, the city hall building is best known for its historical and cultural values. This was our staging point when we did our day tour of the city.  The building was designed by noted Burmese architect U Tin and was completed over a decade. It is also considered an example of unique Burmese architecture integrating the traditional multi-level roofs known as pyatthat.

The city hall and its adjacent stupa have been known as the venues of key political mobilizations and actions. Beside the hall is the High Court and Yangon Post Office.

Access: It is conveniently located right across the Bandoola Park and Sule Pagoda

The Maha Bandoola park is a known landmark and public park fronting the City Hall and surrounded equally important and historical structures. It was named after a popular general who fought against the British empire in the 1800s. In its center is the Independence Monument, an obelisk to mark the independence of Burma from Britain. 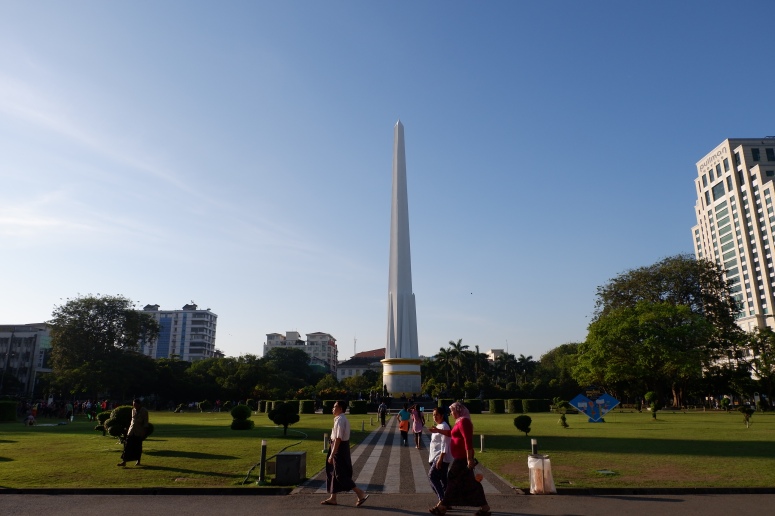 Access: It is located right in front of the City Hall.

Under time pressure, a good go-to destination to quickly appreciate the country’s history and culture is heading to a museum. If time allows, then check out the National Museum of Myanmar in Yangon. Another National Museum has been inaugurated in Naypyitaw. Founded in 1952, the museum houses in its 5-storey building a comprehensive collection reflecting Burmese culture and history ranging from artifacts and memorabilia on Burmese calligraphy, folk and performing arts, ethnic cultures, art works, natural history, ancient ornaments, and items representing Burmese pre-historic and historic period, including its royalties. A best known item on display is the Lion Throne of the Burmese monarch.

Yangon has so much to offer for those with enough time and of course budget to spend. Since we only have a day to spare, it is best to make prior research on what’s best and must to visit. There are equally appealing and important sites and attractions to check out in the city given extended time. Some of these include the Botahtaung Pagoda, Chaukhtatgyi Buddha (Reclining Buddha) Temple, Inya Lake, Gems Museum, Bogyoke Museum, among others. Day tours to nearby townships are also possible. We are also interested to experience its night life and have some taste of its best kept local gastronomic secrets.

We are also sharing our quick itinerary for general reference. Please note that we made this trip coming from Bagan but this is also applicable if you decide to first explore Yangon upon arrival before proceeding to Bagan.

Yangon is the main gateway to Myanmar having most of the scheduled international flights. Daily direct flights are available to/from Bangkok (Don Mueang Airport or Suvarnabhumi Airport), Kuala Lumpur and Singapore. Other travelers also make entry to Mandalay or Naypyitaw from Bangkok or Kuala Lumpur towards Bagan before exiting Yangon.

Around central Yangon and getting to popular tourist attractions, it is still possible to do a walking tour just like what we did. But for convenience, a metered taxi or city buses are a great option especially if you decide to get to other townships. App-based ride-hailing service Grab is also available in the city. If you are off to the airport, make sure to allot enough time (at least two hours) especially during rush hours when traffic could get so bad.

Luggage. This is where it gets tricky if you have large/multiple baggage with you. Note that we only have our backpacks with us during our visit so it was still quite convenient to roam around. What we can confirm from other sites is that there is one in the airport but that is too impractical. What we suggest is to try to leave your baggage (for a fee) in hostels/inns near Sule or Bogyoke market and make this your last stop before going to the airport.

We visit Myanmar in late November which is the start of the peak season. Fortunately, it was not as peak hot and we still felt some chills in the early morning. Better to schedule your visit from November through May before the rainy season sets in from June to September. Note that Burmese observe the Thingyan Festival in April and this means a holiday, hence, various tourist sites are either closed or swelling with people.