While many travelers know Cambodia for Angkor Wat, its most popular tourist destination in the province of Siem Reap, the capital of this Southeast Asian nation is also worth a visit. Phnom Penh is home to grand palaces and structures exhibiting magnificent Khmer architecture as well as a vibrant night scene that could rival that of Siem Reap’s Pub Street.

However, Phnom Penh is also the ground zero off the country’s dark past. In 1975, the oppressive Khmer Rouge regime led by its despotic leader, Pol Pot, carried out the Cambodian genocide — one of the worst human rights atrocities in modern history. It’s estimated that up to 3 million Khmers have been killed in this macabre ethnic cleansing. That’s almost one-fourth of the entire population at the time.

There are several locations just within and around Phnom Penh significant to the dark chapter of Cambodia’s history and that are open to the public. These are the Choeung Ek Genocidal Center and the Tuol Sleng Genocide Museum.

Located just 17 kms south of Phnom Penh, Choeung Ek (also known as the Killing Fields) is a former orchard that had been converted into an extermination camp at the height of the Khmer Rouge rule. Prisoners in the thousands were brought into this camp where they were murdered en masse by Khmer Rouge soldiers. 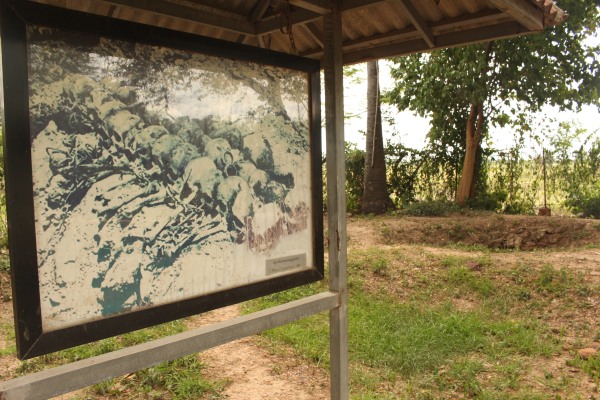 There is a guided audio tour available in several languages including English, Mandarin and French, among others. Aside from providing visitors with historical information on the Khmer Rouge regime, the audio recording also guides you along the path in different sections of the camp and gives you more information about what happened in that spot. Knowing that you are standing on a site where horrific regime-sanctioned executions were conducted makes for a very haunting experience. 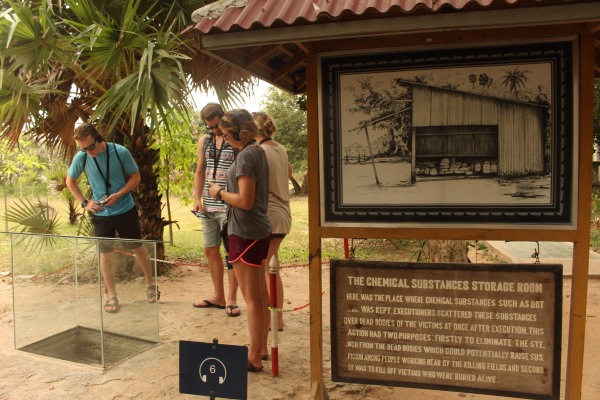 The first and most recognizable structure that visitors will see when visiting Choeung Ek is a white Buddhist stupa housing around 5,000 skulls that were exhumed in the site. These belong to the victims who were executed in the camp. The skulls are categorized in the manner of execution. Some skulls bear bullet holes from gun shots or cracks from being hit by bladed weapons and even farming tools such as hoes (farming tools became a favored killing weapon by the regime in an effort to save ammunition). 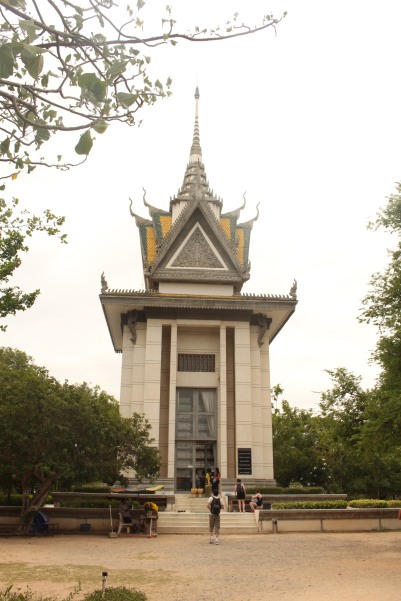 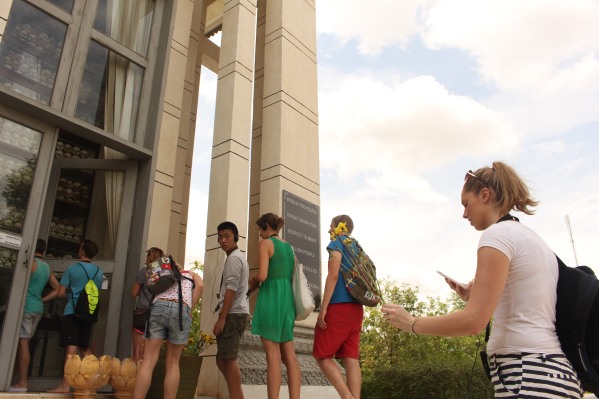 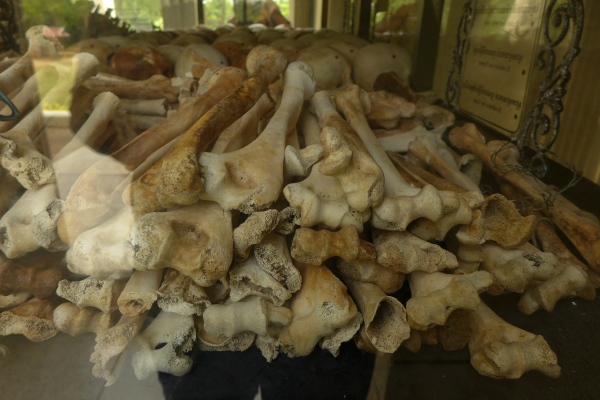 All over Choeung Ek, there are various pits — these are the mass graves from which skeletal remains of victims were exhumed in 1980. During the Khmer Rouge regime, prisoners, including men, women and even children, were bound, blindfolded and brought into the camp where they were massacred, their bodies directly dumped into the pits. There are so many remains here — the estimate is that more than 8,000 people were executed at the site — that sometimes you can still find bone fragments that have been unearthed by rain and foot traffic. 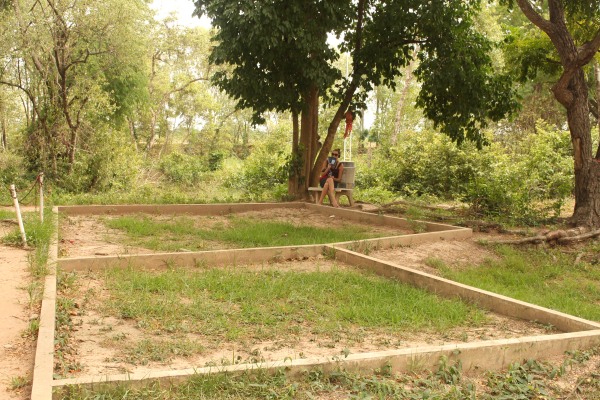 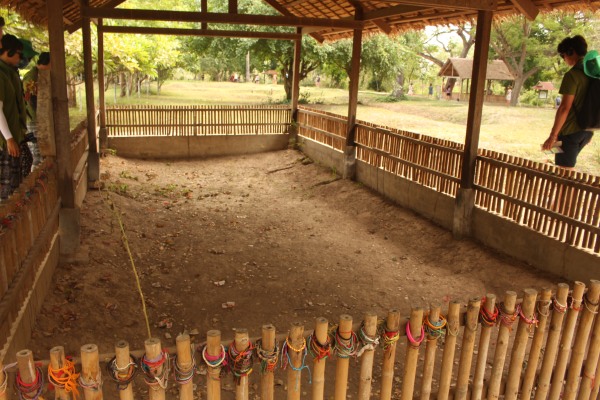 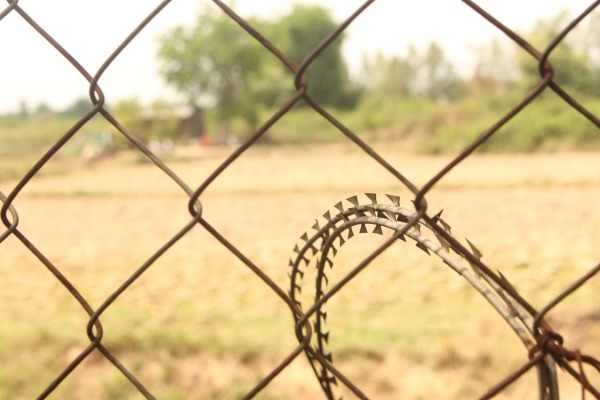 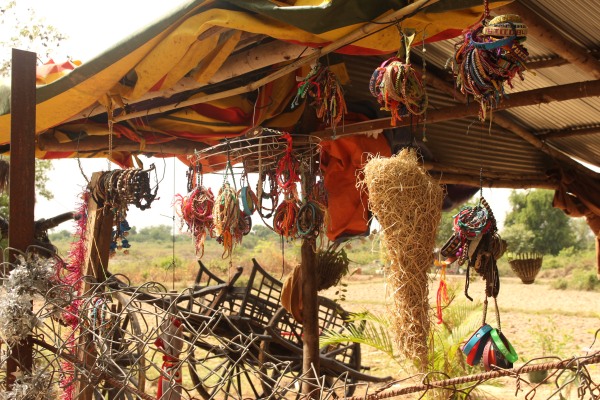 Near the mass graves you will also find large glass cases containing the clothes of the victims, some of these still stained with dried blood. 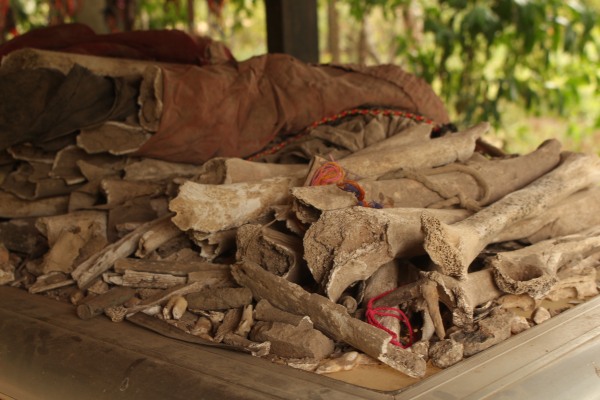 One of the most infamous sites in Choeung Ek is the Chankiri or the Killing Tree. This is where Khmer Rouge soldiers bashed the skulls of babies and children with the agenda of preventing these young ones from seeking revenge for their families’ death against the regime. Today, the tree is decorated with colorful bracelets in remembrance of the young victims in the camp. 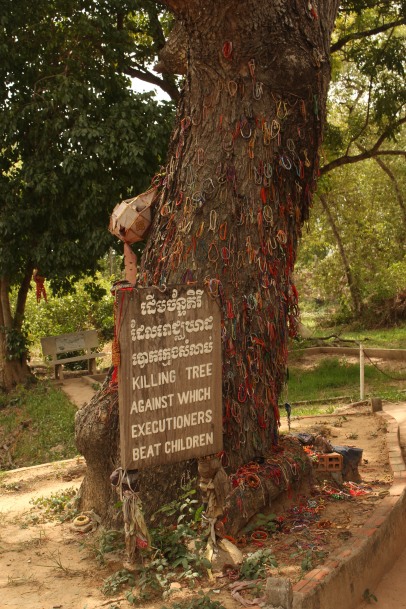 Nearby, there is also a Magic Tree where loudspeakers were hung to mask the sounds of execution. 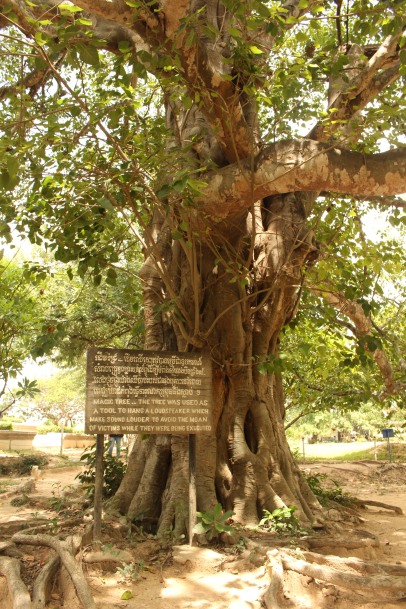 Within the complex, there is a museum where visitors can know more about the trial of Khmer Rouge officials for genocide and crimes against humanity.

Just within Phnom Penh lies the Tuol Sleng Genocide Museum. This cluster of buildings with wide grassy fields may look unassuming at first since this complex used to be Tuol Svay Pray High School. During the Khmer Rouge regime, this was converted into a notorious prison called Security Prison (S-21). It was reported that up to 30,000 prisoners were held in Tuol Sleng where they were interrogated and tortured before being transported to executions camps such as Choeung Ek.

Each of the five buildings features different kinds of exhibit. In some of the buildings, classrooms have been converted into interrogation rooms. Study desks were removed to be replaced by a single metal bed with shackles on both ends. On one side of the wall, there is a photo of a corpse lying on the same bed taken by the photographer who first found the room in that state when Tuol Sleng was first discovered after the fall of the regime. In these types of rooms, you will still find splotches dried blood on the tiled floor. 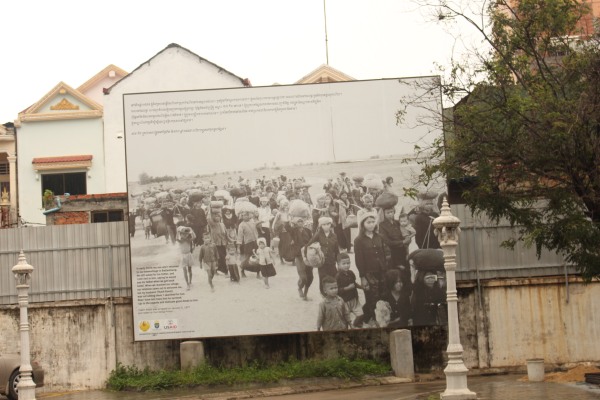 There are also rooms which have been further divided into smaller cells that are made of either wood or bricks. These cells so small and cramped that it’s hard to wrap your head around the idea how humanly possible it were for prisoners to be held there for long periods of time.

In some of the buildings, there are rooms decorated with black and white portraits of prisoners of the camp. The officials in charge of Tuol Sleng meticulously kept records of each prisoner held in the camp. Over 6,000 have been found. It’s eerie to look at these photos with eyes looking back at you — resigned, pained, determined, indignant. 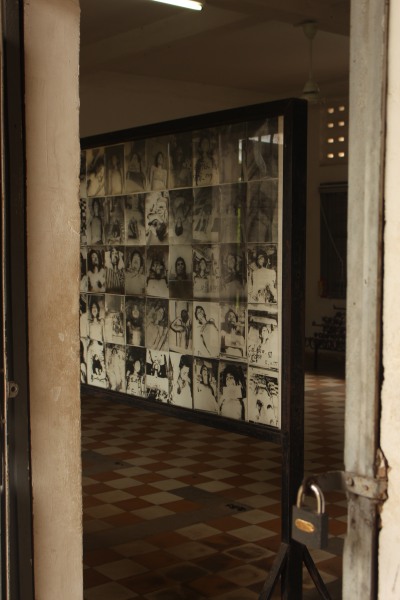 In the courtyard, an exercise monkey bar first used by the high school for its physical education classes has been converted into a gallows from which prisoners were hanged upside down. When they lose consciousness, the guards force the head of prisoners into jars filled with putrid water to wake them up. The interrogation goes on. 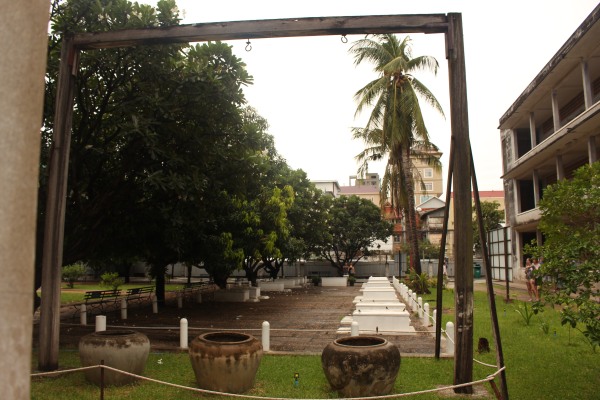 Still on display within Tuol Sleng is the Security of Regulation — essentially the house rules within the prison. It is here where abusive and cruel orders are written such as the fifth rule: “While getting lashes or electrifiction (sic) you must not cry at all”.

A memorial has since been placed within the former school’s grounds including a list of prisoners inside the S-21.

Visiting Choeung Ek and Tuol Sleng was a very heavy experience. We left both places feeling nothing but dread and fear — not of the paranormal — but of the fact that these horrendous mass crimes have committed by the living.

These two sites are considered as a form of ‘dark tourism’ whose moral and ethical values are still being debated today. Some people find it rude and disrespectful to convert these places into tourist spots. For us, we support this kind of tourism since this could be turned into a learning opportunity. The world should know that these crimes against humanity have been committed to remind us not to do this again. [TBC]