Amidst the popularity of K-Pop, getting to Korea has been in the bucket list of many Pinoy travelers. Before, we could only see the wonders of Korea from our TV screens or the Internet. Edge was able to visit the country for several weeks in 2014 on a work-related conference in nearby Gangwon Province and only managed to spend a day for a quick tour in Seoul. A year and a seat sale later, we finally made our way to this amazing country together (but not before a buzzer-beater bout with our Visa application).

Given our tight schedule at work, we were only able to finalize our trip about two weeks from our scheduled departure. Our ultimate challenge in finally conquering Korea together was securing a tourist Visa. So, roughly a week before our flight, we went to the Korean Embassy to file our application. It was rather nerve-wracking given our limited funds and the fact that Edge did not have an Income Tax Return from the previous year, which is a requirement for Visa application. But there was no turning back then, and by the power of his nature of work and letter of explanation maybe, we both got our approved Visa just in time for our trip. On a Holy Week Tuesday, we were on board our Air Asia flight bound for Incheon.

Also known as South Korea (to distinguish it from its northern neighbor), the Republic of Korea is situated in the Korean peninsula between the Sea of Japan and the Yellow Sea. It is separated from the north by the 38th Parallel or the Demilitarized Zone (DMZ). Its capital is Seoul, with Busan and Daejun as main ports and major metropolis. Jeju Island in the southern portion of the country is another popular tourist destination not only for its Visa-free entry but also for its distinction as one of the New 7 Wonders of Nature. But we will save that for next time. Given our limited time, we only managed a quick 4-day budget excursion of Seoul and nearby attractions.

Located just a few blocks from our hostel in Insadong, our first stop in our Seoul escapade was a quick stroll at this quaint Korean village.  Lined with traditional Korean houses called hanok, Bukchon Village offers a glimpse at how local houses must have looked 600 years ago. Be mindful of your surroundings since this is still a residential area. Some houses have been converted into shops and art galleries and are open for visitors. One can also don the traditional Korean clothing called hanbok. Entrance: FREE, Minimal charge for activities inside the houses 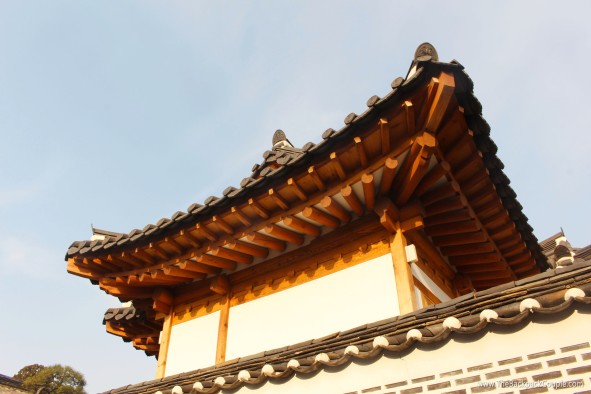 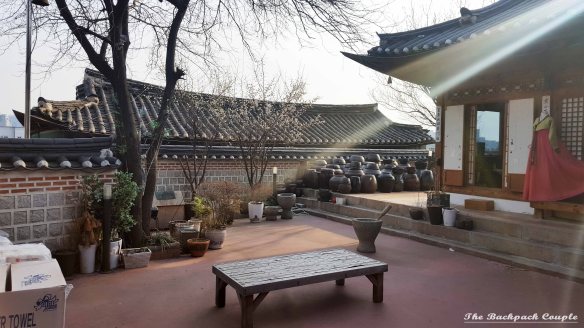 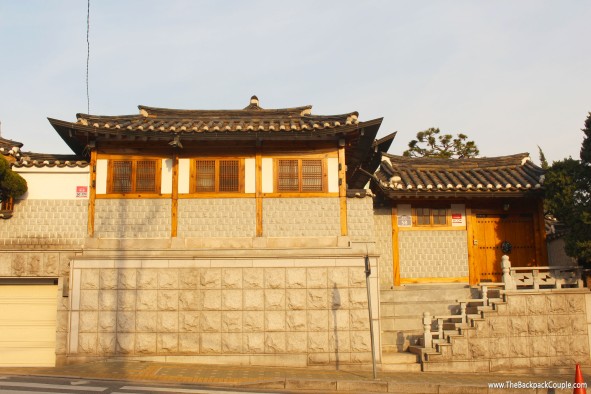 Also known as the Northern Palace, this former seat of power is one of Korea’s most famous landmarks and the largest of the palaces located in Seoul. Built in 1395, this palace was later destroyed and then restored in the 1800s. Take a stroll around its vast courtyard and take in the sights of the magnificent towers with the Bugaksan Mountain in the background. Don’t miss the chance to witness the changing of the guards (see schedule here). It’s quite fun to watch the royal palace guards dressed in colorful traditional garb marching to the sound of a Korean buk. This ceremony is purely theatrical. Entrance: KRW 3,000 / Package: 4 Palaces (Changdeokgung, Changgyeonggung Palace, Deoksugung Palace, Gyeongbokgung Palace) + Jongmyo Shrine –  KRW 10,000 (valid within 3 months) 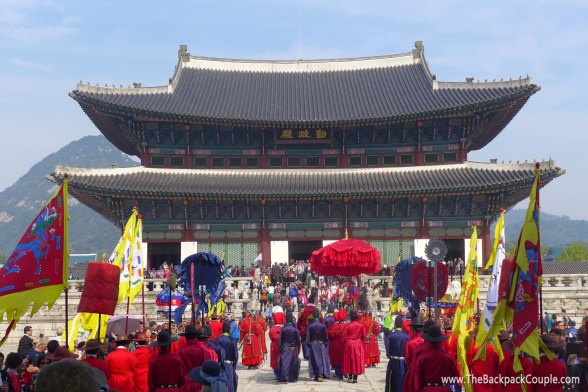 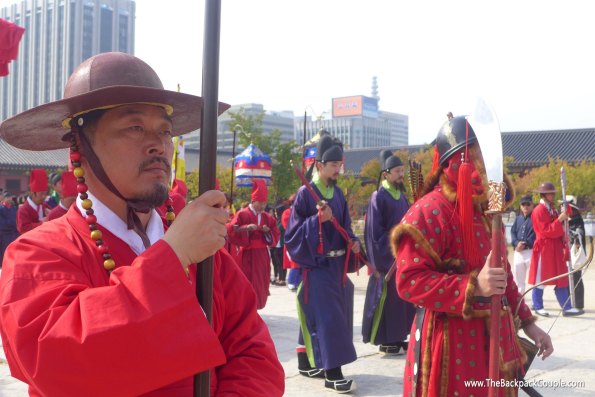 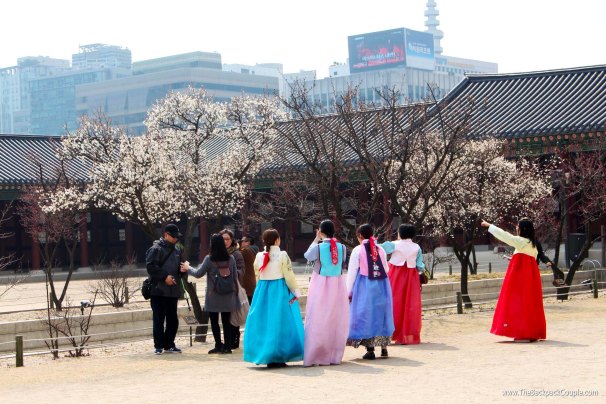 This vast complex is located just in front of Gyeongbokgung. The most common feature of this square is the huge statue of King Sejong the Great, one of Korea’s most beloved monarchs. He was also the commissioner of Korea’s alphabet, the hangeul. Gwanghwamun Square is the venue for many activities such as mini concerts and exhibits. 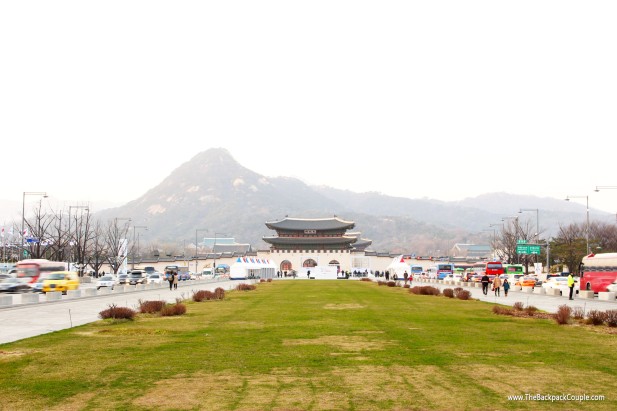 This area features a stream that runs across Seoul’s central business district, not far from Gwanghwamun Square and a picturesque spot for romantic walks or group pictures. The Chonggyecheon Stream is a favorite location for Korean TV shows and movies, hence its popularity.

See more of Korea’s nightlife in this popular district. Myeongdong is known for rows upon rows of famous Korean and international fashion, makeup and cosmetic brands. You can also find salons, spa and massage parlors around. For every purchase, they usually provide complimentary items. You can always haggle for extra items or samplers. Make sure to check ahead if you’re in a duty free or a tax-free store so you can avail the tax refund scheme in Korea. For a certain amount spent in shopping, you can promptly recover the amount of tax applied in the items just by presenting your passport. For the hungry, there are lots of food establishments to choose from. Indulge in some Korean barbecue (gogijip) with some soju or try out the street food. There are lots of food stalls to choose from. Yum! 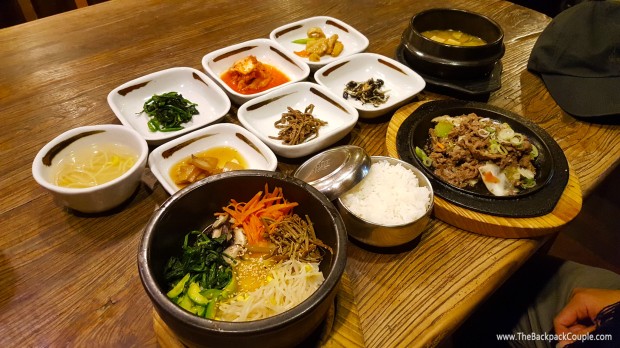 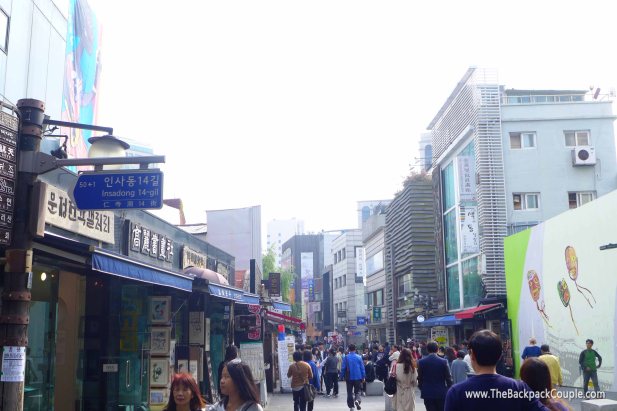 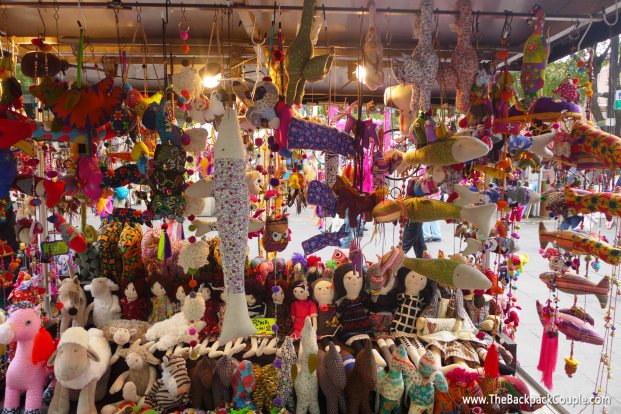 A trip to Korea should not be complete without visiting the Demilitarized Zone. This strip of land which runs across the Korean peninsula essentially separating North and South is the most heavily militarized area in the world. The DMZ Tour is composed of two main tours. The first and more popular tour is the Panmunjeom Tour which takes visitors to the Joint Security Area (JSA) Freedom House where representatives of the two Koreas can hold meetings. Going inside the JSA allows visitors to technically “set foot” in North Korea.

We got unlucky since there were military exercises taking place in Panmunjeom on the scheduled date of our trip. As a result, we had to opt for the DMZ Day Tour where we visited the Imjingak Park and the Dora Observatory, which provided us a view of the North Korean side which can be better viewed through telescopes. We also visited the 3rd Infiltration Tunnel, one of the many discovered tunnels that North Korean forces attempted to dig to get to the Southern side. At the DMZ Theater, we watched a short film showing the history of the Korean War and the DMZ as well as hopes for reunification. Finally, we visited the Dorasan Station, a train station that was supposed to connect South and North Korea through Pyongyang. Sadly, North Korea closed the train station in 2008. Various travel agencies offer full package and discounted rates for DMZ and Panmunjeom/JSA Tours. We availed the services of VIP Travel for a DMZ Tour at KRW 45,000/pax. 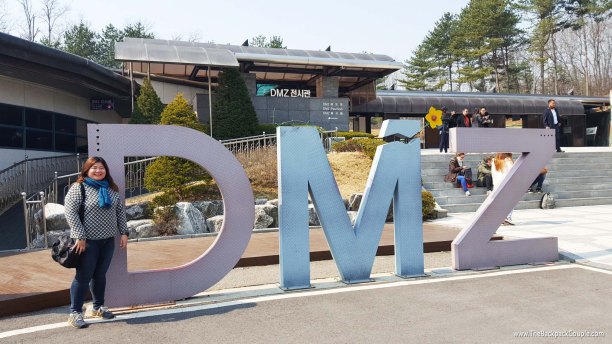 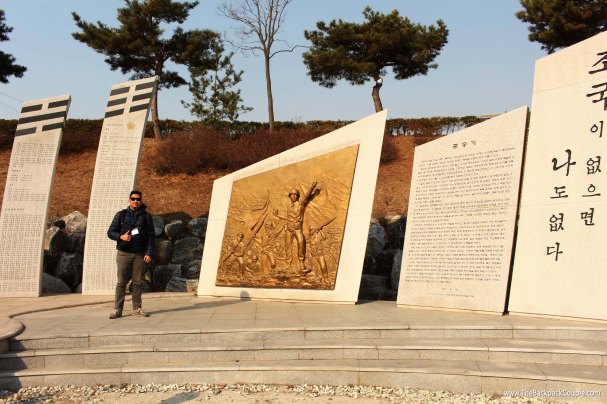 Nami or Namiseom is a half-moon shaped islet formed following the construction of Cheongpyeong Dam in 1944. It was named after General Nami, a Joseon Dynasty general whose grave is situated in the island. Nami is a favorite family destination and getaway for couples due to its romantic feel and ambiance, thanks to the island’s iconic tree-lined pathways and vegetation. It is best known as the location of the popular 2003 Korean drama “Winter Sonata”, a landmark of which was made an attraction in the island. Nami features a grass yard, a lake and various educational and recreational facilities such as swimming pool and water-sports, theme park, and roller skating rink. It also has lodging facilities. Although it is 63 kilometers from Seoul, Nami is easily accessible by train from Seoul going to Gapyeong Station. From Gapyeong Station, a shuttle or taxi will ferry you to the port going to the islet. Entrance Fee: KRW 10,000. 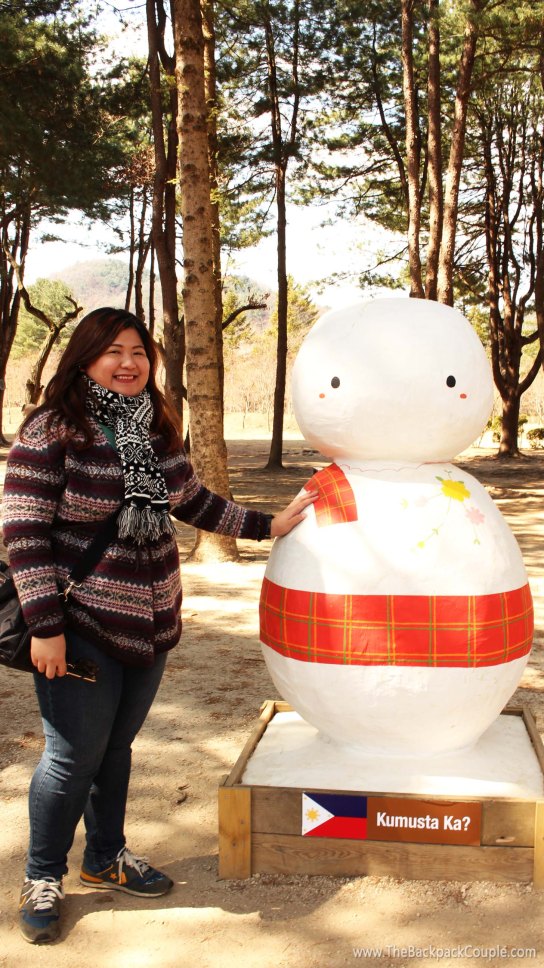 Dominating the Seoul skyline is the Namsan Seoul Tower or N Seoul Tower. The first of its kind in Korea, the N Seoul Tower stands at 236.7 meters and was first used as a broadcast facility. It has since become a popular landmark in Seoul thanks to its observation deck that offers a 360-degree view of the Seoul metropolis and nearby mountain ranges. It also houses a variety of restaurants, souvenir and theme shops. Don’t forget to check out the Love Locks at its base, which is a favorite spot for couples (the adjacent souvenir shop sells cute and colorful padlocks, but you can also bring your own). N Seoul Tower is reachable via the Namsan Circular Shuttle Bus 2, 3 and 5 from various subway stations. A cable car is also available going to the base of the Tower for a fee. Entrance (Observatory): KRW 10,000.

The Changdeokgung Palace was a primary palace for the Joseon royalties built after the Gyeongbukgong and the most preserved of the Joseon palaces in Seoul. The palace features a public area, the royal residence and a garden called Huwon. Changdeokgung is also considered as one of the most historically significant attractions in Korea and is regarded to have been built in harmony with nature. In 1997, the palace was inscribed into the UNESCO World Cultural Heritage Site. During our visit, we experienced our first Korean cherry blossoms within its gardens, hence it is a must visit during the spring season. It is located very close to the Gyeongbukgong, the Bukchon Hanok village, Insadong Street, and subway stations. 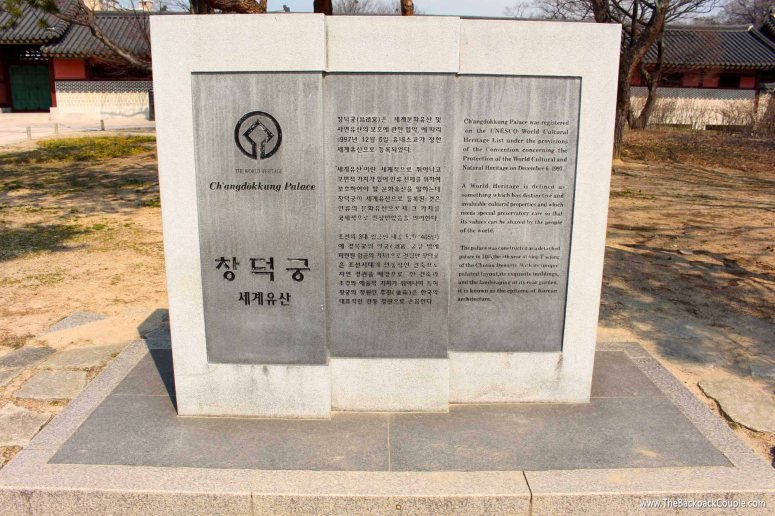 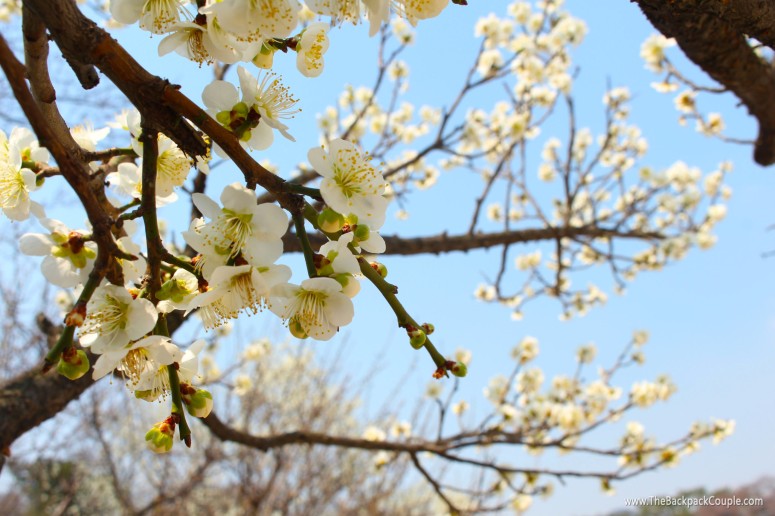 We were lucky to have stumbled upon Insadong Hostel via Agoda. We availed of their Twin Bedroom (2-Beds/2pax) with Breakfast at PHP 1,800. We happened to book just days before our trip given our Visa ordeal. Nevertheless, our stay here was all worth it, from the ambiance, interiors, breakfast and of course, the very friendly owners especially Helen (and their friendly cat!). We highly recommend this as your accommodation in Seoul. For one, the location is very accessible from the airport through the Limousine Bus.

Getting to the hostel is very easy from Incheon Airport. Upon exit from the arrival area, look for the Airport Limousine Bus – Bus No. 6011. This line will stop at Anguk Station. Travel time is close to an hour. From there, Insadong Hostel is a mere 3-5 minute walk. Express Trains are cheaper option but it takes longer and requires transfers.

Entry Visa. Any travel to Korea requires a Visa, whether for tour, business or visiting relatives. You may want to know on How to Apply for Korean Tourist Visa in the Philippines.

From the Airport. The fastest way to reach Seoul center is through the Airport Rail going to Seoul Station.

However, since we are going to Insadong, a faster and convenient option is the Airport Limousine Bus 6011 for an hour travel. It will stop at bus stop 12A at the arrival area of Incheon Airport stops at Anguk Station. Fare is KRW 10,000.

Getting Around. Korean rail system is one of the most efficient if not the best in the world. At the heart of this transportation advancement is the Seoul metro, an extensive subway system that connects everything around the metropolis and serves as hubs for provincial routes. Seoul Station, the one featured in the zombie flix “Train to Busan” is the main station. To save on cost and avoid the hassle, it is wise to avail of transportation cards such as T-Money and Cashbee for use on subways and buses, especially if you’re on a limited time. Taxi cabs are convenient choice but could be pricey. For those who want to experience Seoul more intimately, you can always go around on foot. [TBC]