Coming off a late arrival in Kalibo and an uncomfortable early morning commuter van ride, we arrived on schedule at the Seafood Capital of the Philippines, Roxas City. Waiting for us were groups of local tourists, with whom we are shared the trip going to Islas de Gigantes.

Islas de Gigantes (literally Giant Islands) is a group of islets off the coast of northern Iloilo that occupies the Panay portion of the Visayan Sea. It is under the jurisdiction of the town of Carles, some 150 kilometers north of Iloilo City. It is comprised of about ten islands, the two biggest being Gigantes Norte and Gigantes Sur. There are also the more popular islets such as Cabugao, Antonia, and Bantigui which are located near Gigantes Sur. Gigantes was originally called Salauag in the pre-Hispanic times in reference to a native tree abundant in the island and was only changed to Gigantes during the Spanish period owing to a legend that the islands are once occupied by giants.

We have always been fascinated by stunning photos of Isla de Gigantes, the most popular of which is a view taken in Cabugao Gamay. This spot, which shows the length of the island lined by coconut trees and surrounded by blue ocean waters, is perhaps the single most photographed point in this area. So we made it a point to place this high up on our travel destinations for the year. Luckily, we were not only able to score low fares, we also encountered Las Islas Travel & Tour, a new tour operator based in Roxas City. The travel agency made our Day Tour possible in the islands for a very, very sulit rate. They are the city’s newest tour outfit and one of the few that operates the Roxas connection of the Gigantes Island group.

As indicated in our itinerary, we left Roxas City a little past 6 AM heading to the town of Carles. About two hours later, we were already in Iloilo’s northernmost town and the jump-off to the islands. 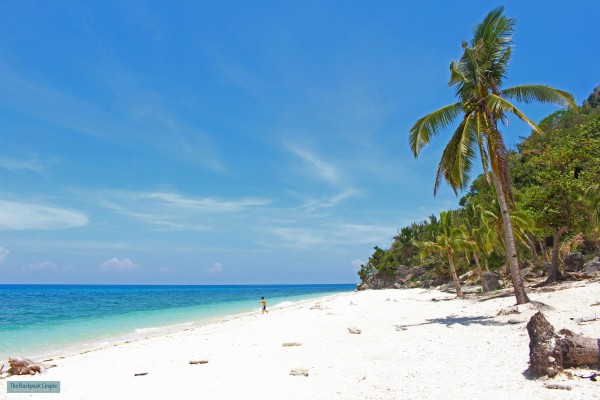 Cabugao Gamay. Located in Barangay Gabi (Gigantes Sur), this privately-owned islet is perhaps the most iconic and beautiful in the Gigantes group and the most popular island-hopping destination. Save your batteries and phone/camera memories for stunning shots atop its natural view deck after a brief rock climb. Enjoy its crystal clear and white sand beach excellent for swimming and snorkeling activities. 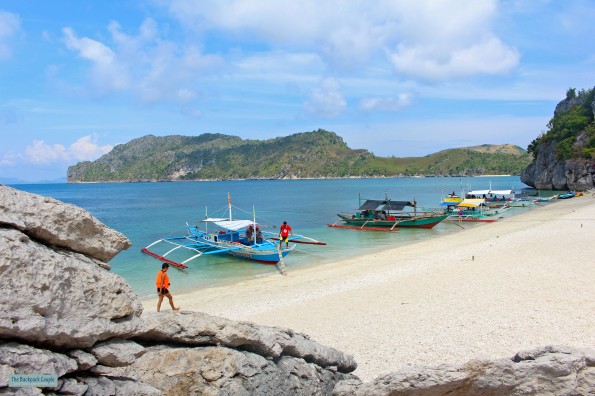 Don’t miss swimming and snorkeling at Antonia Island. This private island is one of the of few that are not formally inhabited and is popular among backpackers and beach lovers seeking privacy, away from the usual beach crowd of others islands.

Bantigue Sandbar. En route to other islands, make sure to visit this long stretch of fine, white sandbar during low tide to appreciate its unique beauty against the Gigantes’ clear waters and nearby lush tropical islands as backdrop.

Tangke Lagoon. Another popular spot in the islands is the Tangke saltwater lagoon situated in Gigantes Sur, hidden behind its tall granite cliffs. Entrance to the natural pool is possible through a narrow passage right beside where the boats dock. Water level varies depending on the tide, but it’s best to go there early morning or on a weekday when there are minimal visitors.

Cliff Diving/Jumping. This activity is for the daring and is also possible right at the entrance of Tangke (This is a potential profit-making activity but should be regulated. Make sure that your boatmen are there to assist you during the jump).

Other places to visit: Gigantes Lighthouse – Checkout the island’s Spanish-era lighthouse for some amazing view of the the islands. | Camping is possible in the islands, but with due permission and corresponding rates. | Spelunking – there several caves in the islands worth exploring. You can inquire with the locals on where to find these hidden wonders.

Reaching the islands is possible by going through any of the three major gateways to the jump-off towns of Carles or Estancia in Iloilo Province, namely: Iloilo City, Roxas and Kalibo via Roxas. We took the latter on airfare consideration via Air Asia.

Plane. Cebu Pacific & Philippine Airlines have multiple flights to Iloilo City, Roxas City and Kalibo (and Caticlan-Boracay). Air Asia on the other hand only flies to Kalibo.

Boat. 2Go Transport sails to Iloilo City and Roxas City from Manila at least once a week. It has also daily trips from Batangas to Caticlan-Boracay and another schedule coming from Manila.

How to Reach the Islands:

The fastest and most convenient way to reach Isla de Gigantes is through the town of Carles. Proceed to the town pier, the Bancal Pier, and drop by the Municipal Tourism Center for proper registration and payment of fees. The LGU is imposing a Php 75.00 Environmental Fee for tourists. Good thing they have also regulated the rates and accredited the boats for the Gigantes tours. It is recommended to contact them beforehand and reserve a boat especially during peak season (holidays & summer). There is now a regular daily trip from the Carles port to Gigantes Island (Langob) with fare at Php 75.00/pax. Travel time is less than two hours. We recommend this route if your schedule is limited to a day or two.

If coming from Estancia, there is a daily commercial boat going to the islands that leaves past noon with travel time of about two to three hours. You always have the option to charter and haggle rates for a private boat that could bring you the islands.

Upon arrival in Asluman (Gigantes Norte), you can hail a motorcycle (habal-habal) to your accommodation or onward destination in the islands.

Since we were only there on a day tour, we were not able to get hold of the details of accommodations in the islands but there are several resorts in some of the islands. For more exciting ways to spend the night in Gigantes, you can try Maruja Flora’s Island Paradise located in Cabugao Gamay with rates starting from Php 300/pax person including tent rental (via exploreiloilo.com). Contact: (+63)9399212456 / (+63)9984883876; (+63)(033) 3970328. You can check out Explore Iloilo for more comprehensive information & guide about Gigantes.

Since we were part of a group tour, food was included in the package. We feasted on a variety of seafood abundant in the island such as their popular scallops and blue crabs. Many tag Gigantes as the Scallops Capital of the Philippines and for good reason. There are locals wandering around, selling their fresh catch for relatively cheaper prices, including the wasay-wasay, a shellfish that resembles an oyster. You can ask your resort to prepare the seafoods for a minimal fee.