Edge and I regard ourselves as relatively adventurous, so it’s not unusual for us to do more daring activities than your usual strolling and sightseeing. While we do not claim to be climbers, we have scaled a few mountains here and there. But what has long captured our attention and aspirations is the famous Mt. Kinabalu in Sabah, Malaysia.

Located in the northwestern part of the island of Borneo and standing at a mighty 4,096 masl (13,438 ft), Gunung Kinabalu is considered as one of Southeast Asia’s tallest peaks and one of the highest trekkable mountains in the world, which simply means that climbers need no technical skills in order to reach the top. In fact, even children and the elderly have managed to conquer this mountain, but that doesn’t mean that the climb is a piece of cake. We can testify that the trek is one of the most physically, emotionally and mentally challenging activities that we have ever brought upon ourselves.

Packing was a tricky task. We had to make sure that we’d be able to bring everything that we would need up in the mountain, while keeping our bags under 7 kilograms each. We brought cool clothes that can provide relief against the humidity in the lower part of the mountain where the forest cover is thicker. On the other hand, conditions at the top of the mountain are rough and temperatures can be freezing. We brought thermal clothing, thick jackets, scarves and bonnets to protect our faces from the fierce winds, a couple of thick socks, and a pair of gloves and climbing shoes with excellent grip. Good thing for us, we’re able to score discounted pairs of reliable footwear leading to our scheduled hike. It’s also recommended to bring a raincoat or poncho in case it rains (which it did during our climb).

Aside from our gadgets, we also secured trekking poles/walking sticks, probably one of the smartest decisions we made. Lightweight but sturdy, these poles helped us keep our balance during the ascent and removed some of the pressure from our knees and legs during the descent. Trust us, you won’t mind the extra space it will eat up in your luggage once you realize its value.

LED headlights are also a must since you will be using this for the summit assault, which will be done in absolute darkness.

Upon arrival at the Kota Kinabalu International Airport, we went on a 2-hour ride aboard a public utility van that plies the Kota Kinabalu-Ranau route and disembarked at the gate of the Kinabalu National Park. We allowed ourselves an extra day in the park exploring the surrounding areas and helping ourselves to taste the delicious food in the restaurants within the vicinity.

It was also important for us to stay an extra night before the climb to help our bodies acclimatize, the park itself being perched at a relatively high altitude. Altitude sickness is a very common occurrence among many climbers of Mt. Kinabalu. Even the fittest of climbers may have their journeys cut short when they become affected by altitude sickness, so acclimatization is crucial and highly suggested.

Aside from taking care of our registration at the park office, we also attended a brief orientation where experienced and kind park staff gave us essential reminders, tips and warnings.

Day 2:  The Loooooooong Way Up

Waking up from a good night’s sleep inside our comfortable mountain lodges, we looked outside the window and got our first full cloudless view of Mt. Kinabalu. It was a sight that was both imposing and breathtaking, one that instills both intimidation and inspiration.

After wolfing down a hearty breakfast and meeting our guide/porter, Dawet, we finally headed to the Timpohon Gate to secure our ID cards and began our ascent. The “climb” ironically starts with a downhill march until you reach Carson Falls (or lack thereof; the falls hardly has any water during summer), a landmark that is important as you will realize later. After passing the falls, the trail goes continually upward for the next five or six hours. I am not kidding.

Scattered along the Timpohon Summit Trail are numerous mountain huts. Most if not all of these huts are equipped with clean restrooms with running water. We would take longer stops in these huts, since Dawet told us to rest no longer than five minutes at a time along the trail to prevent our bodies from cooling down.

Being a popular climbing destination, the summit trail is well-established and conveniently safe. Most parts of the path, especially in the lower regions, are made of sturdy wooden or metal stairs. In some parts though, we had to step on large boulders, craggy rocks or just loose soil, so we had to be careful. At any day, there are as many hikers climbing up and down the mountain, hence, it is always a must to observe courtesy when negotiating steep and narrow trails. And don’t forget to greet fellow climbers of various nationalities. 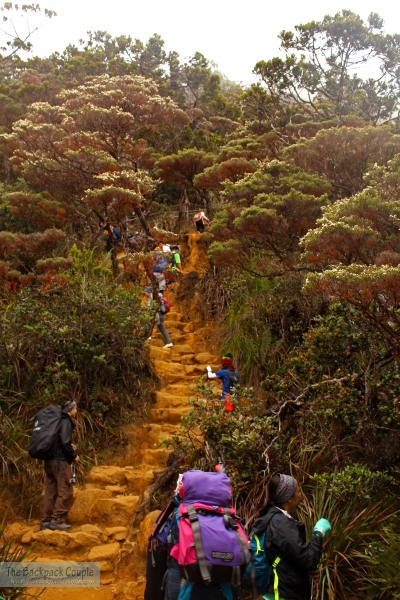 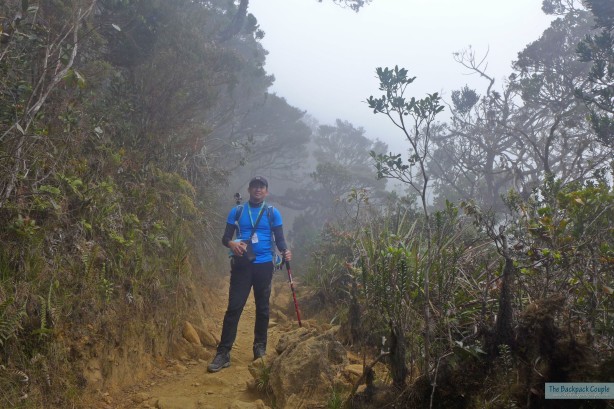 The scenery changed frequently as we climbed higher. In the lower part of the mountain, the trail is surrounded by tall hardwood and thick vegetation. As we climbed higher, the temperature would drop, fog would cover some parts of the trail and the landscape would be dominated by bonsai trees with their skeletal twigs and dark red foliage. Keep your eyes peeled for strange flora, especially the rare pitcher plant (Nepenthes species) of Kinabalu, among other flora and fauna.

Occasionally, porters carrying loads of baggage up to the lodge will pass by and it’s not hard to envy their strong, well-toned legs. It’s easy to see why the Malaysian government regards these porters as the unsung heroes of Mt. Kinabalu. Without them, perhaps the operations of Laban Rata will come to a halt, which will greatly affect tourism. 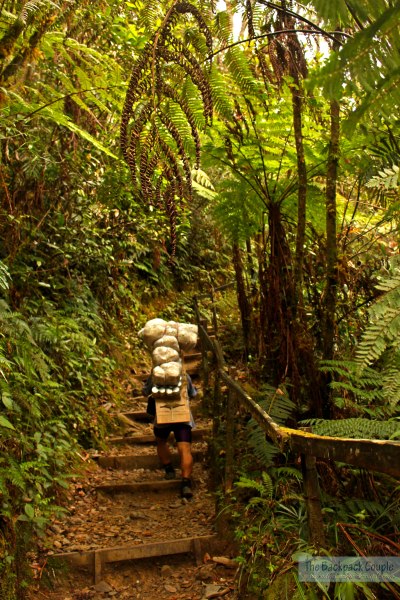 After what seemed like an eternity, we finally reached the Laban Rata Mountain Lodge (3,272 masl), our home for the night. The canteen, already filled with exhausted climbers by the time we had arrived, follows strict meal serving times, so be sure to grab some dinner before turning in for the night. 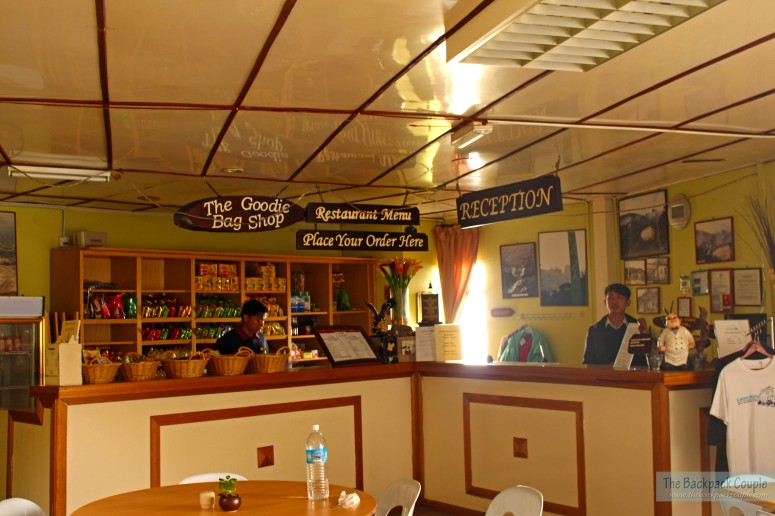 After just a couple of hours of sleep (we discovered that it’s frustratingly hard to get some shut-eye at high altitudes), we got up at the ungodly hour of 2 AM, ate supper and began the hardest part of the climb — the summit assault. By this time, temperatures had dropped even further and dew began to set, making the trail wet and slippery. Being a moonless night, it was pitch dark and we only had our headlights illuminating the way. Oxygen was so thin so it was quite hard to breathe, and it took us very little effort before getting tired. But we climbed up, and up, and up. It seemed endless.

After about two hours, we finally reached the beginning of the most dreaded part of the assault — The Danger Zone. In this 700m stretch, climbers have to cling onto a white rope as they scale the inclined part of the mountain.  This is where those shoes with good grip come in handy. It felt unnerving as we moved, checking the narrow path for footholds while ignoring the thought of falling down the steep mountainside.  The darkness helped since it allowed us to focus on the path straight ahead. 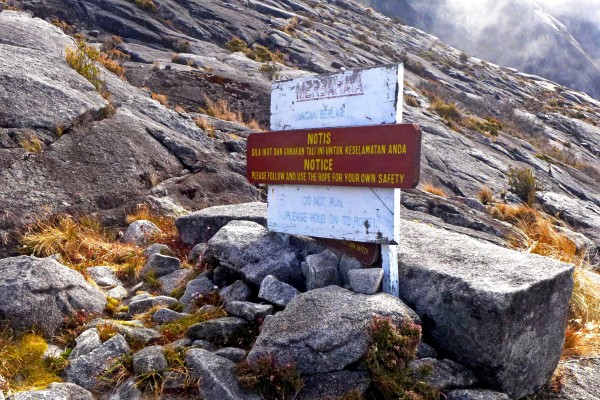 Eventually, we made it to the end of the white rope and the Danger Zone and reached Sayat Sayat Hut, the final checkpoint. From here, reaching the summit will depend on the climber’s speed and endurance. The surroundings took on the grey hue of the mountain’s granite face. Vegetation here is sparse, apart from the scattered tufts of grass. The path may look like a gentle slope and it probably is, but due to the thin air, every step takes tremendous effort. 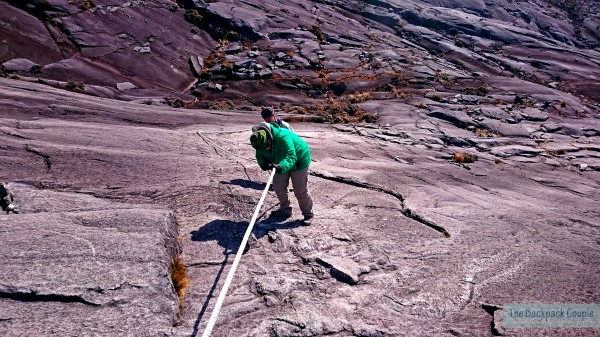 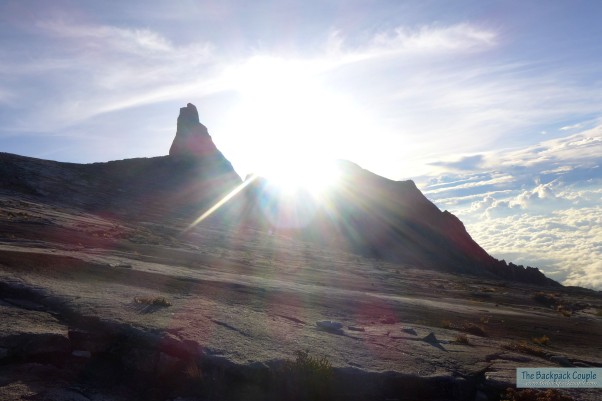 In the end, we did not reach Low’s Peak, the highest point of the mountain’s summit. But, as consolation, we had made it to the South Peak, perhaps the most photogenic. The view up there was simply astounding. You could just drown in the vast sea of clouds and watch the shadow the mountain casts on the plains below. 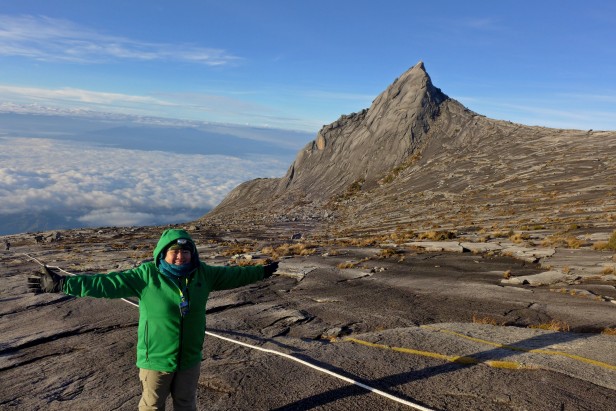 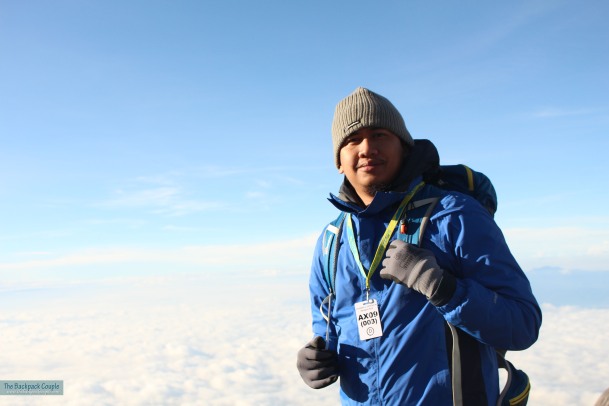 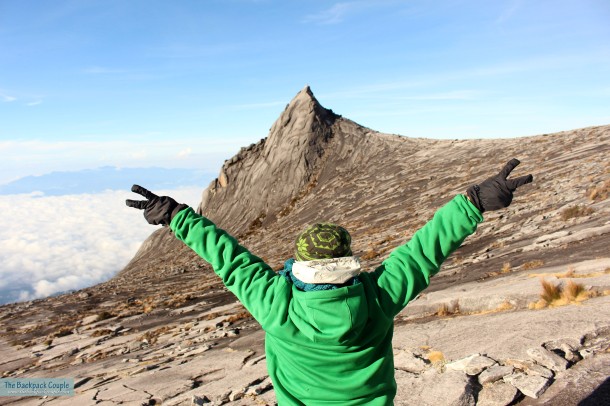 Unfortunately, we couldn’t stay for too long since it was too cold and we still had the arduous task of climbing down, not to mention the time limitation imposed by the park. Many climbers of Mt. Kinabalu testify that the descent is more difficult than the ascent, and experience taught us that they are right. A lot of pressure is being put on your knees and feet, making them hurt after a while. We also hit a stroke of bad luck that day for it started raining while we were making our way down. It made the trek through the rainforest much more dangerous, with muddy trails and loose, slippery rocks all over the place. This is why you have to bring a raincoat or poncho; rainfall is unpredictable and you wouldn’t want to emerge out of the forest drenched.

After six hours of hiking down, we were elated at the welcome sight of the Carson Falls and the Timpohon Gate. Yes, we were tired, wet, hungry, and in pain. We couldn’t even walk properly for the next few days. But knowing how we’d conquered Gunung Kinabalu was enough to keep our spirits up. Not to mention, this is a pioneering and a physical feat for us.

Besides, not making it all the way to the top only means one thing: we have to come back, right? 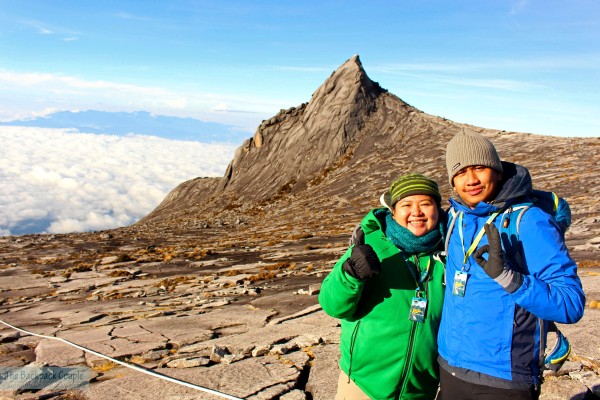 Check out our Mt. Kinabalu Travel Guide for complete details of our itinerary, accommodation, transport, budget and travel tips. Thank you for visiting and we hope to see you on the road. Follow us on Twitter, Facebook and Instagram.

4 thoughts on “Scaling Malaysia’s Highest: Up and Down Mt. Kinabalu”