Last January, we visited the remote but remarkable province of Batanes.  We spent the half of our first day touring North Batan.  For our second day, we explored the opposite side of the island for the South Batan tour. [Also check-out our account of the Sabtang tour.]

Starting very early in the morning, we first proceeded to the Chawa View Deck in the municipality of Mahatao.  While stunning views of the West Philippine Sea can be seen from the top of the view deck, visitors may opt to descend the hundred or so steps to get closer to the crashing waves of the sea. 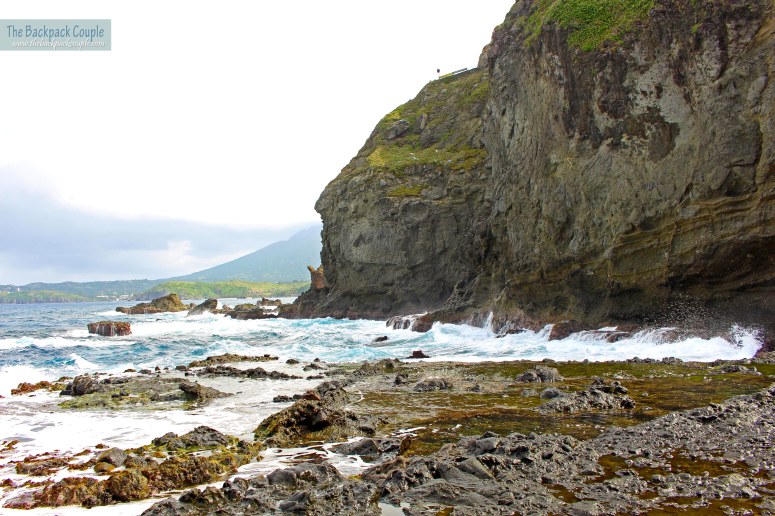 Next, we drove over to the Mahatao Shelter Port, where waters are more calm and serene.  Since Batanes lacks long shorelines, the quaint little port serves as the sanctuary where Ivatan fishermen dock their boats, especially during a storm.

Our next stop was another popular destination in Batanes, the Tayid Lighthouse.  Sitting on top of a hill and facing the vast Pacific Ocean, this still-functional lighthouse provides spectacular views of the ocean as well as the rolling hills below. 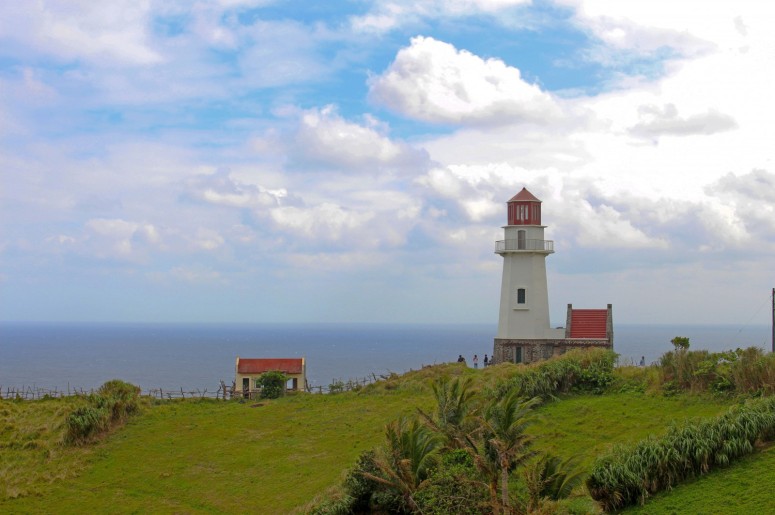 Nestled in a curve along the highway, it might be easy to miss the Homoron Blue Lagoon.  Viewed from the top, this lagoon has an inviting albeit short and rocky shoreline as well as cerulean waters ideal for swimming during summer. 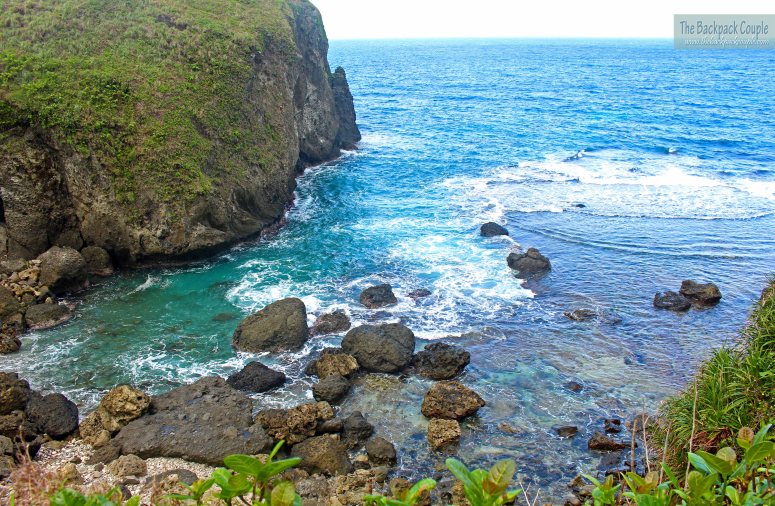 Driving further will take you to White Beach, with its long stretch of cream colored pebble shoreline.  The waves here are noticeably calmer than in other parts of the island, making this one of the more popular public swimming spots.

Located in the center of the Mahatao town is the San Carlos Borromeo Church.  Large and beautiful with its pure white paint, the church is so well-preserved that it is considered a National Cultural Treasure by the National Museum.

As you drive along the streets of Mahatao, you will spot the Spanish bridge, just one of the several in the island.  The bridge mirrors the Ivatan stone houses and despite being centuries old, this bridge is still functional. To preserve the bridge, an alternate road has been constructed for heavier vehicles.

Located in the neighboring municipality of Ivana is the House of Dakay, one of the oldest surviving Ivatan stone house in the island.  Visitors can come and meet the family living inside.  Don’t forget to get to know the late Lola Inday and discover why many regard her as the most popular woman in Batanes.

Facing the port of Ivana, the Ivana Church, also known as the San Jose de Obrero Church, is intimidating with its high yellow facade and wide courtyard.  The rear portion of the church was taken down in the mid-1800s, and the abandoned ruins can still be checked out behind the church.

Just across the church is the popular Honesty Coffee Shop (also called as Honesty Store). Operating solely on the basis of honesty, don’t be surprised when you see that no one watches over the self-service store. Customers can buy their goods by leaving the payment on a counter and noting the amount in a logbook.

After a quick snack at the store, we moved on to see the Alapad Rock Formation, an impressive rock structure that looks as if it jutted diagonally from the ocean.  Nearby, visitors can hike atop Alapad Hill, which offers a stunning panoramic view of the Pacific Ocean and the eastern coast of Batan island. 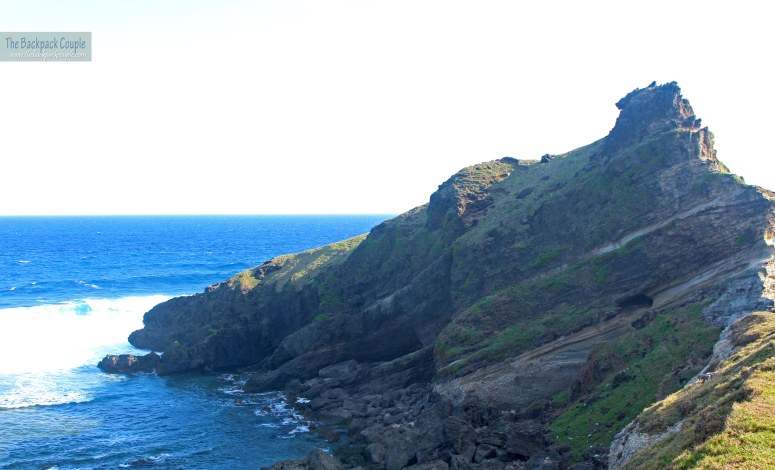 Our final stop for the day was our personal favorite, the Racuh a Payaman, fondly called as Marlboro Country.  This communal pastureland is so picturesque with its sea of green grass meeting the blue waters of the sea.  From this spot, you can see the Tayid Lighthouse from afar, Diura Beach and its surrounding cliffs, as well as a view of Mt. Iraya in the horizon.  We spent a long time here taking in the view; it was actually painful to leave. 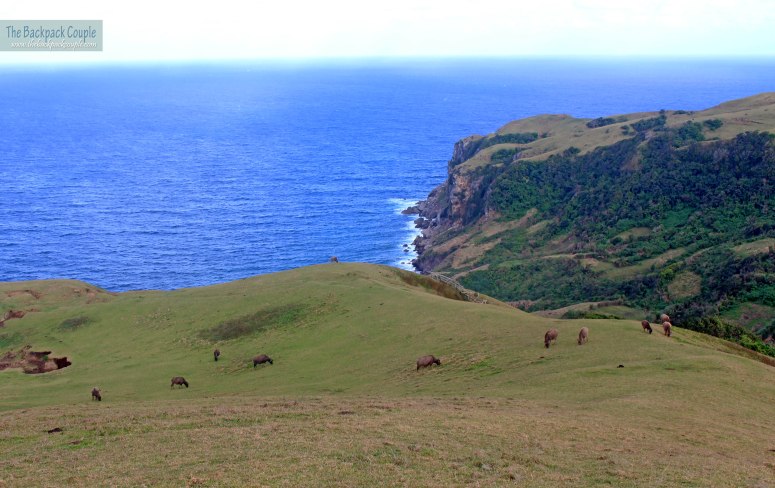 I personally consider the South Batan tour as my favorite.  The place is just filled with wonders both natural and man-made.  As we watched the sun set over the turbulent sea, our guide promised us an even better third day of tour.  We couldn’t be more excited.

The safest way to reach Batanes is via plane. Philippine Airlines (PAL) safely flew us to this northern paradise despite the usual overcast sky. PAL flies daily from Manila to Batanes. Follow @flypal for timely seat sales and travel fairs. In our case, we are lucky to have availed of a promo round-trip fare in last year’s Travel Madness sale. Skyjet also flies DAILY to and from Batanes.

During our 5-day vacation in Batanes, we mostly stayed at Crisan Lodge for only Php 2,800 for 4 nights (at a discounted 700/night). With its cheap & cozy rooms, clean restrooms and a convenience store downstairs, Crisan Lodge (09158490178) was our home away from home. Not to mention, the very friendly and helpful owners Sir Mon & Mam Crisan Imperial. We also stayed for one night at Berlen Lodge (09204784003 c/o Ms Elena Villarta), which is very near the airport. A number of affordable lodgings are available in Batan Island, with Marfel Lodge probably as a popular affordable accommodation option.

Some of the famous restaurants in Batan include Casa Napoli and Octagon Restaurant, to name a few. However, with their steep prices, it’s not practical to eat out for every meal. Many of the lodges accept ‘paluto’ (home cooking), where you can ask the hosts to cook simple meals at prices that will not hurt the pocket. In our case, we would go out to buy freshly grilled pork barbecue and we’d ask our hosts to cook steamed rice.

A lot of Batanes tours are available online, but we acquired the services of BISUMI Tour and Services. They turned an ordinary vacation into an educational tour thanks to their kind and knowledgeable guides. Every little thing was accounted for from the moment they pick us up until they drop us off in our lodge, so we had nothing to worry about. Definitely recommended. You can checkout their page for tour & rates details. You can also try  Chanpan Tours and Services Batanes. Shout out to our guide, Sir Art.