While we began our Vietnam trip with a day tour around Ho Chi Minh City, we packed our bags and donned our nón lá, the iconic Vietnamese conical straw hat, and decided to sneak a peek at the nearby province the following day.  From the capital, we took a two-hour bus ride to Mỹ Tho, the capital city of Tiền Giang, a province located near a portion of the Mekong River in South Vietnam. 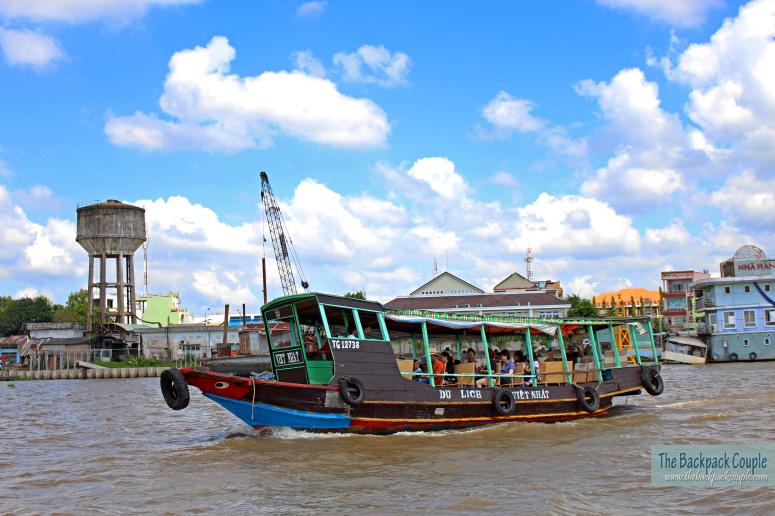 Upon arriving at the port, we sailed through the brown, muddy waters of the mighty Mekong towards Con Phung Island, otherwise known as Phoenix Island.  The island, lush with vegetation, is home to hectares of coconut plantation, which is one major source of income for its inhabitants. Our walking tour of the island started at a bee-keeping house, where tourists can have a close encounter with the busy but harmless bees.  We were then ushered to a small dining area where we were allowed to taste the local honey tea, a nice concoction of tangy lime and sweet honey.  Visitors can also buy other bee products such as pollen and royal jelly, all local and organically-made.

A brief stroll along a tiny marketplace selling souvenirs brought us to another area where we were made to sit and enjoy some tropical fruits while we were being serenaded by several women singing traditional Vietnamese songs. Feeling much more refreshed, we were then led to the bank of one of Mekong’s canals.  This is what I would consider as the highlight of the trip.  The canal was full of rowboats — empty rowboats, rowboats carrying tourists, rowboats filled with local products and goods — it looked so crowded that we didn’t even know how we would make it through.  Our skilled boat woman maneuvered along the canals in a speed unimaginable for such a tiny vessel carrying five people.  We had to watch out to avoid getting hit by overhanging palm leaves or even by other boats and paddles. 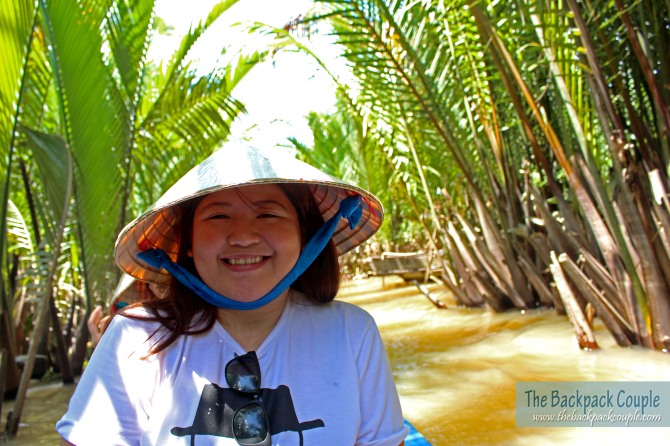 After that fast and furious ride, we were then led to a small, outdoor factory where they produced kẹo dừa or coconut candy.  Guests would get to see the quick and expert hands of the locals as they cook and pack the candies.  Aside from these sweet treats, visitors can also purchase other products and crafts — all made from coconut, of course.

We then took a horse cart ride this time heading further inside the island.  In the village, we saw the residents going about their daily lives as we galloped through busy town centers, quiet streets and wide rice paddies.  The change of scenery was as quick as the trip, thankfully, because this time we were starving.  We stopped at a restaurant where we sampled the famous local fried elephant ear fish.  The restaurant also serves other exotic dishes for the more adventurous, but, in our case, squirrels, cobras, and crocodiles just aren’t our cup of tea.

Having been satisfied by our delectable lunch, we then sailed once more through the canals, this time on board a larger boat.  With the Mekong noticeably packing larger punches due to the mid-afternoon high tide, we sailed back to the port and returned to the busy city, posing a stark contrast from the peaceful and idyllic life in rural Vietnam.