In March 2013, Edge and I were in Leyte where we had the chance to see and even cross the famous San Juanico Bridge, the longest in the country.  We had originally planned to visit another notable bridge located in the southern part of the province, but we couldn’t make it due to various circumstances.  That’s why when we went to the coastal city of Baybay earlier this year, we eagerly jumped at the chance to visit Agas-Agas Bridge, the tallest bridge in the country at 292 feet. 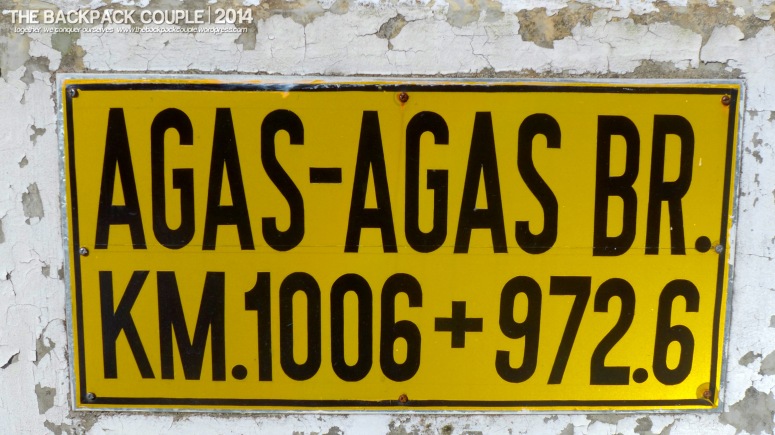 The bridge is situated in Brgy. Kahupian, Sogod town in the province of Southern Leyte, along the boundary of Leyte Province. Agas-Agas Bridge was built in 2006 to allow the safe and quick passage of vehicles traveling from Visayas to Mindanao along the Pan-Philippine/Maharlika Highway.

Together with some relatives and friends, we left Baybay City and took a loooong motorcycle ride all the way to Sogod.  We zoomed past vast fields and plantations, but it was mostly hills and zigzag roads.

After two hours of being in the road, we finally arrived at the mighty Agas-Agas Bridge.  Being on top of the bridge was really an exciting experience.  To our right was a sheer drop overlooking a deep ravine, and to our left was an ominous mountainside covered by lush trees and vegetation.

There used to be a zipline and cable car attraction in the area a few years ago which gives thrill-seekers the chance to have a jaw-dropping “fly” past the bridge.  Sadly, during our visit, the zipline was no longer operational, with locals chalking it up to management issues.

How to Get There

From Tacloban/Ormoc/Baybay. Take a PUV going to Maasin City, Southern Leyte then alight at Mahaplag Crossing. Motorcycles (Habal-Habal) are available to bring you to Agas-Agas. Buses going to Mindanao from Manila or Ormoc also pass by Agas-Agas bridge.

Bonus! Have a taste of the local version of hopia called Hopia Malitboganon (sort of a giant Piaya), at a  store located at the rest area just past the bridge.

One thought on “Agas-Agas: Crossing the Philippines’ Tallest Bridge”