Five months through the destruction brought about by Supertyphoon Yolanda in central Philippines, particularly in the islands of Leyte and Samar, lives of local populace who have yet to return to their normal, day-to-day lives.  It is quite inspiring to note the united efforts of the international community and various organizations in response to this disaster with the urgent task of relief and recovery efforts.  Shout out also goes to all volunteers and the relief efforts of people’s formations.  In light of this rebuilding process and as a gesture of support to promoting and boosting local tourism in affected areas, we are sharing our account of our visit last year in Biliran and Leyte.

Perhaps one of the most overlooked destinations in the country is Eastern Visayas.  As compared with its neighbors Cebu and Bohol, the Samar and Leyte provinces remain secluded and waiting to be discovered.  As part of our quest to explore the lesser-known countryside, we decided to spend the Holy Week in Biliran, Leyte, and very briefly in Samar, in this order.

We arrived early in the morning of Holy Wednesday at Tacloban and headed straight to the van terminal via regular jeepney from the airport.  By 6 AM, we are on-board Van-Van’s Van (yes, that is its real quirky name ☺) to Naval , the capital of Biliran, for a two-hour road trip.  We bought some essentials and a bundle of moron, Leyte’s famous chocolate-flavored suman, and headed straight to the Port of Naval, the jump-off to the island town of Maripipi.  ‘

We learned that the schedule of the regular passenger boat was still at 11 AM.  By the time we were on board the motorized outrigger, it was already approaching noon.  However, the scenery of islands and coasts along the route impressed us no less.

Fortunately, we also met and briefly talked to an elderly female passenger who turned out to be the wife of one of Maripipi’s town councilor.  In an instant, we were oriented on the whats and hows in the island, including some useful info about our host for the night.  Again, we proved to ourselves that that when you’re in some far-flung destination, just try to reach out and socialize with the locals and you’ll never find yourself lost.

Pressed for time, we decided to spend the next day in mainland Biliran to explore the hidden treasures of the island province.  True enough, we were treated to some refreshing dip and water rush of Biliran’s waterfalls.  Thanks to our driver-and-guide-in-one, Kuya Jimmy Badanoy, for the kind and sulit day tour.

Biliran is blessed with many waterfalls, many of which are very accessible.  Given the relatively small land area of the province, one can actually make it to all of these falls in about 1 1/2 to 2 days.

The most popular waterfalls in the province are the Tinago Falls in Caibiran and the Bagombong Falls in Almeria.  Other equally refreshing and fascinating falls are Recoletos, Ulan-Ulan, Sampao, Casiawan and Kasabangan.  A unique and standout attraction is the Tomalistic Falls, which locals claim to be literally the sweetest waterfalls anywhere.  But given our limited time, we only managed to visit Tinago and Bagongbong Falls, with the promise of conquering the other falls in the near future. For this tour, Kuya Jimmy and another driver served as our guides. 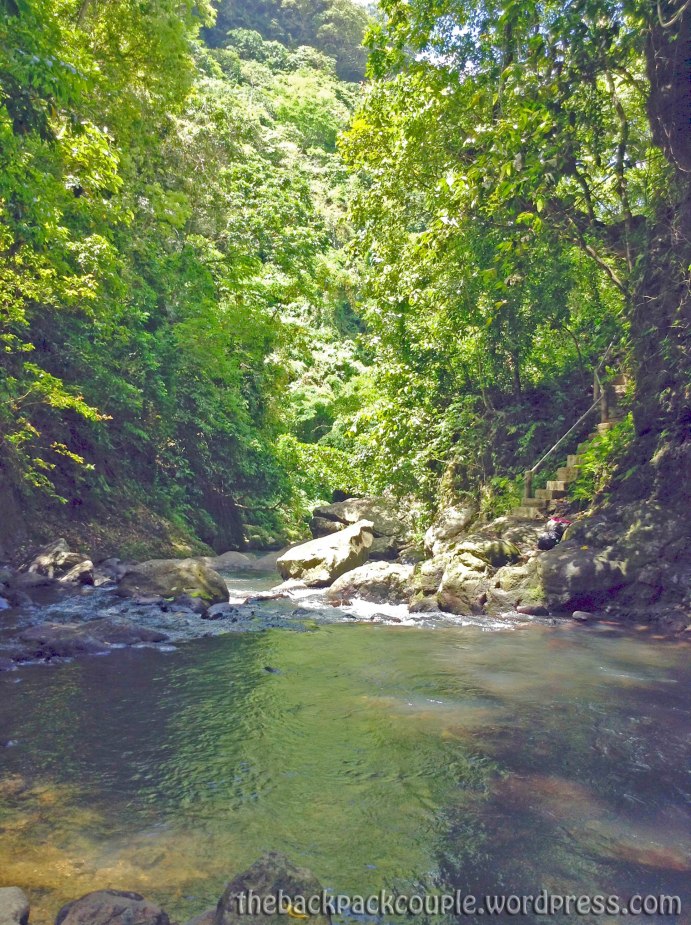 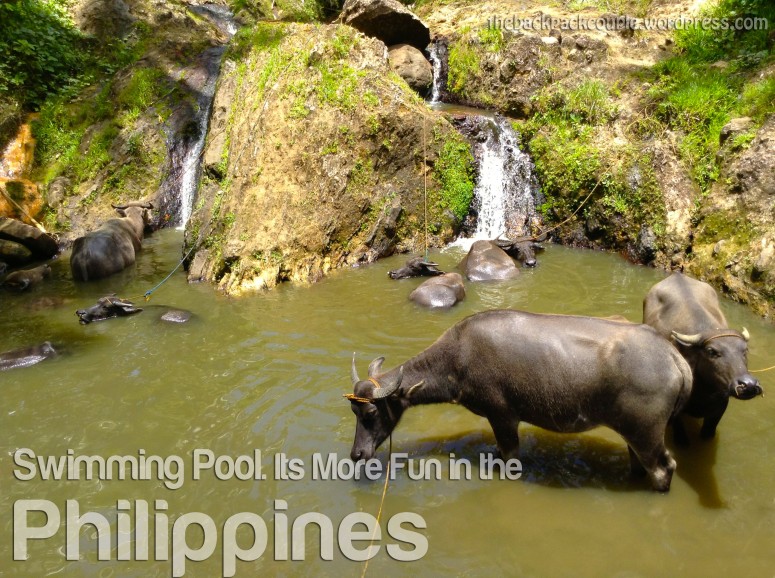 Bagombong Falls.  Since we came from Maripipi, we hired an outrigger for our own exclusive use to go back to mainland Biliran and visit this mighty waterfall.  Our entry point was Kawayan town just north of the Naval where our driver and guide, met us and drove us directly to Bagombong.  The falls is reachable some 15 minutes away from Almeria highway and after a 20-minute downhill trek, so be sure to bring with you lots of water and energy food.  Despite the rough and slippery terrain, we finally reached the falls. On our way back, we passed by this a mud pool for carabaos (water buffaloes) fed by three cascading mini waterfalls. 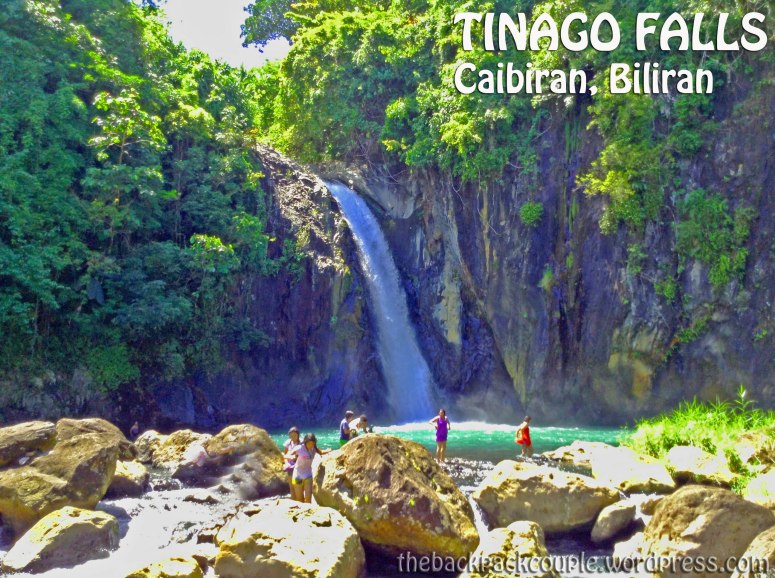 Tinago Falls.  Literally hidden in the interiors of Caibiran, Biliran, the breathtaking Tinago Falls is secret no more.  Derived from the local term meaning “secret”, Tinago is arguably the most popular and sought after among Biliran’s waterfalls so we chose this destination to cap our brief tour.  We drove in for about an hour by motorcycle from Naval on paved roads.

En route, we passed by the breathtaking countryside of Biliran and even stopped briefly in the so-called little Baguio of the province, a zigzagging and cool portion along the road that was shaded by ancient acacia trees and other natural vegetation.  From the highway, it only took us another 10 minutes to reach the area.  We paid for the entrance fee at Php 30.00/pax and changed to our swimming outfits.  Unlike the other falls, there is a functional facility around the falls including open cottages, rest rooms, and shower rooms,  since this is a major tourism attraction of the province.

How to Get There

The gateway to Biliran is Tacloban City which is served daily by the three leading carriers, Cebu Pacific, Philippine Airlines, and AirAsia Zest from Manila and Cebu (Cebu Pacific only).  From Cebu, passenger boats also ply the Cebu-Tacloban or Cebu-Naval direct route.  By land, Biliran can be reached via the various shipping entry points of Leyte such as Ormoc City, Isabel and Palompon.  From Manila, various bus companies also ply the Philippine Nautical Highway via Bicol and Samar.  Mindanao folks can also reach Biliran via the Lipata, Surigao-Liloan, and Southern Leyte Ro-Ro connection.

From Tacloban, proceed to Van-Van’s Terminal for regular trips to Naval. If going to Maripipi Island, please ask the driver to drop you at Naval Pier.  The last trip is at 11 AM.  If you’re planning a mainland tour, you can avail of Kuya Jimmy’s habal-habal services by contacting him at 0918-266-1505 or by hiring regular minicabs or jeepneys around the island.

There are no high-end hotels or resorts in Biliran, except for some commercial accommodations in the capital Naval and resorts in Almeria.  For backpackers like us, an overnight sleeping room would suffice.  GV Hotel Naval is a wise option aside from the local inns and resorts.  We highly suggest that you check the reference websites below for complete details on the accommodations and travel arrangements in Biliran, including where to eat.  For our lunch stop in Naval, we tried their own local version of Goldilocks restaurant within the town center.  Don’t forget to drop by the local souvenir shop at the public terminal complex near Naval pier.

Postscripts: It has been a year since we traveled to Eastern Visayas, in particular Leyte and Biliran.  Little did we know that few months later, the unprecedented Yolanda (Haiyan) tragedy would strike and break these areas into pieces.  We just wish that all those people we encountered during our last visit were all safe and sound along with deep prayers intended to all who survived and those who perished. ~Ive & Edge

One thought on “The year before | BILIRAN ISLAND”